Student Travels to Russia, with Love 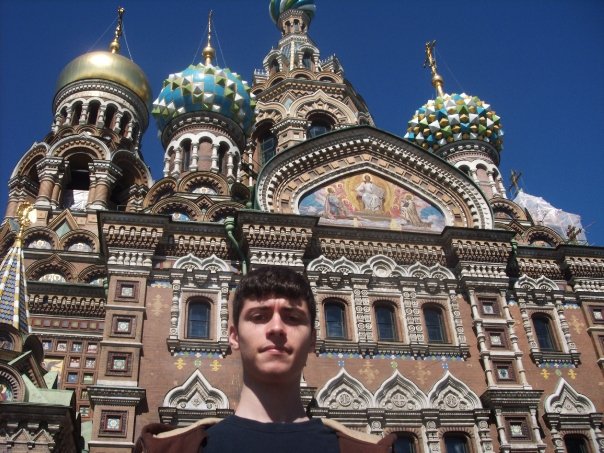 Aaron McCasland’s fascination with Russia was in place long before he enrolled at Stony Brook. That interest was further fueled after flipping through the Undergraduate Bulletin and noticing that there was a trip to St. Petersburg available through the University’s International Academic Programs.

As a result, he immersed himself in Russian culture by minoring in Russian and taking Russian literature classes and a Russian cinema class at Stony Brook, all of which prepared him for Russian culture once he enrolled in the  Study Abroad program.

McCasland and his American classmates stayed in dorms, four to a suite. “The dorm did not have supplies so we had to buy utensils,” he said. “Fortunately, I had learned how to ask in Russian where some of the supplies were located in the store.”

While in Russia, he supplemented classroom learning by sampling Russian music and television.

Oddly, it wasn’t adjusting to the Russian culture that presented many difficulties, but the phenomenon known as the White Nights, the few weeks around the summer solstice during which sunsets are late, sunrises are early, and darkness is never complete. “Most of the time it would look like dusk throughout the night,” McCasland said.

Less difficult but significantly different was getting used to Russia’s smaller portions of food when dining out. “For example, in a restaurant I went to in St. Petersburg they served vareniki [potato dumplings], which were a little larger than a half dollar, and they served seven or eight of them. In America, if you had something like this in a restaurant, you would be served 15 or 20.”

Sampling the local fare led to the discovery of such culinary delights as bliny, which are crepes made with various fillings and toppings that vary from maple syrup to berries, chocolate, and bananas; pelmeni, dumplings filled with meat such as pork and eaten with sour cream; and borsch, soup made from beets.

McCasland noticed another cultural difference—Russians tend to be quieter and more reserved than Americans. “I think that when many people think of Russia they think of drinkers, especially vodka drinkers. However, drinking in Russia is a social activity and is accompanied by toasts that can be lengthy. It is an activity engaged in with friends and is not necessarily something that’s done at a party.”

After traveling to Russia, McCasland noticed two misconceptions most Americans harbor: Freedoms are restricted in Russia and Russians stand in line to buy everything. “As I went around the country, you don’t necessarily feel a difference between rights and freedoms,” he said. “The only thing that comes to mind is the fact that Russian police officers are allowed to stop anyone at any time and ask for their documents without having an apparent reason for doing so. As a result, we all had to make sure that we kept our passports and other travel documents with us at all times in case we were stopped.”

As for the long lines for which the Soviet Union was known, “the only line I had to stand in when I was in Russia was at the cash register. There were plenty of choices for consumers at the store.”

When he wasn’t debunking popular myths about Russian culture, McCasland was hitting the books. While abroad, he took a Russian language class as well as two other classes, one about philosophers from Russia and other countries, and the other studying music videos and the language of culture.

He also traveled to Peterhof, which is near St. Petersburg, and toured many gardens, springs, and palaces built for the Russian czar, Peter the Great.

Although McCasland loves everything Russian, he is a German major, and the semester he spent in Russia has only heightened his desire to travel. Next spring, he will be spending a semester in Germany through the Study Abroad program. “I hope that the time I spend in Germany will provide me with as much, if not more experience, than the trip to Russia did—experience that I can use when I start teaching,” he said.

“McCasland said he would like to teach German at the eighth or ninth grade level but eventually get his Master’s degree and perhaps a doctorate and possibly teach at the college level. I have already taken some of my required education courses this past semester and will take a teaching methods course next semester, go to schools, and observe teachers,” he said.