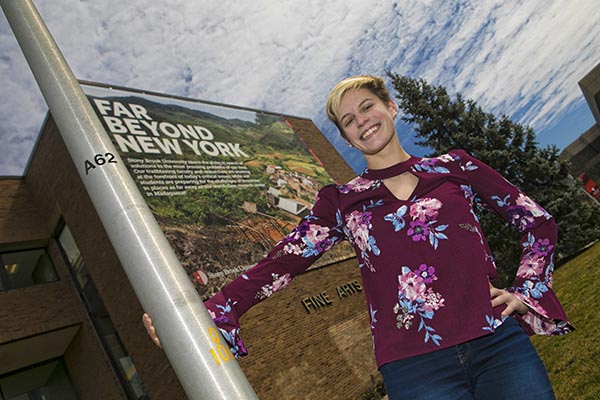 Hannah Mieczkowski ’17 discovered psychology in ninth grade when she read Malcolm Gladwell’s best-seller Blink — a book that suggests that spontaneous decisions may be preferable to well-planned ones.

“It was the first time I realized that the scientific method I had practiced in various science classes, such as chemistry and biology, also applied to other subjects with which I connected,” she said.

Thus began a fascinating series of research experiences en route to a 4.0 GPA.

In Professor Susan Brennan’s Communication Lab, Hannah collected and analyzed data for multiple experiments regarding eye movements, theory of mind and interpersonal deception. In the spring of 2016, she presented her independent project, “How Nicknames Alter Perceptions of Character Traits,” at Stony Brook’s Undergraduate Research Conference.

“My interest in nicknames and likability grew out of studies I read about job applications and the tendency to infantilize women by treating them like children or viewing them as less knowledgeable,” said Hannah. “It is well-known that names have an impact on perceptions of many qualities and it is easy to see this phenomenon when employers consider résumés. Additionally, researchers have shown that people tend to ascribe more positive traits to women who are seen as inferior in some way. I hypothesized that women with nicknames (Katie) would be more likable than men with nicknames (Johnny) and women who used full names (Katelyn).”

In Professor Brennan’s lab, she examined and analyzed eye-tracking and “white lies” used in everyday conversation.

“I don’t think these studies would make people wary of social interaction with other people, but rather help us to gain a greater understanding of how humans behave,” Hannah said.

Perhaps the most topical research subject that Hannah tackled focused on how stylistic changes in texting might convey different meanings. “For example,” she said, “If person A texts ‘okay.’ with a period as opposed to ‘okay’ without punctuation, or even ‘okayyyyy’, person B may assume various things about person A’s intentions. Is person A mad or tired? This topic interests me not only because texting is an integral part of communication now but also because I feel as if current advertisements and PSAs directed toward millennials are not as effective as they could be, partly because of the way they are worded.”

What Hannah has learned in the classroom she can apply to life. For example, her studies have taught her that people are more likely to believe someone and subsequently change their behavior if they think that person doesn’t have anything to gain from the situation they are in. “This helps in conflict resolution because it reminds me to stay calm and neutral and try to relate to whomever I am talking to or mediating with,” she said.

These are skills that Hannah can use as she works her way through a PhD program in Communication at Stanford University toward her ultimate goal of becoming a professor or a researcher at a tech company.