Student Fights for the Rights of the Undocumented 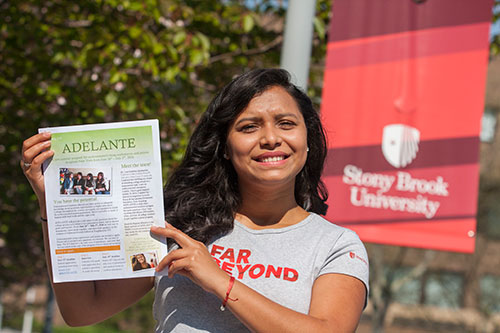 Imagine saying goodbye to the mother who raised you and not knowing when you might reunite, if ever.

That was the pain of separation that Gabriela Quintanilla ’16 and her sisters felt when their mother left their native El Salvador to join the rest of her extended family in the United States. But Gabriella declined to wallow in self-pity. Instead, she became an advocate for social change, turning her own personal pain into gain for others like herself.

“My mother promised to send for us in two years,” said Gabriela. “She just wanted a better life and thought of the U.S. as a land of opportunity. Our economic status in El Salvador was not great.”

Two years later, Gabriela and her siblings shed tears of joy when they arrived on U.S. soil in Elizabeth, New Jersey, to finally be with their mother again. “That moment meant everything to us,” she said.

Gabriela had little time to revel in her reunion: She was thrust into American culture — a middle school in Fallsburg, New York. When it came time for high school the following year, Gabriela was forced to move to the town of Liberty.

So great was the learning curve, Gabriela spent the first year immersed in English As a Second Language instruction rather than general education classes. But the experience taught her that if she put forth the necessary effort and self-discipline, she could achieve her goals.

That became more apparent to her when she went to Dutchess Community College. While there, Gabriela qualified for the Exploring Transfer program at Vassar College, an initiative that introduces underrepresented, first-generation-to-college community college students to the possibilities of transfer to a wide range of four-year colleges and universities.

“It was a five-week program, also very rigorous, but interesting and fun,” said Gabriela. “I called it my academic boot camp. It was the only time in my college career when I didn’t sleep much.”

While she was in the honors program at Dutchess Community, Gabriela dreamed about transferring to a private liberal arts school— but because she was still undocumented, she didn’t qualify for most forms of financial aid and could not afford the tuition.

She began to explore public state and city schools. A visit to Stony Brook sealed her decision to enroll here and major in psychology. She soon changed her major to sociology and then everything clicked, especially when she took the Sociology of Human Reproduction class with senior lecturer Catherine Marrone.

It seemed that Gabriela had found her calling. In her senior year and with Marrone as her honors thesis advisor, Gabriela penned,  “A Disconnect Between Reproductive and Women’s Overall Health: The Case of Latinas and an Absence of Discourse,” an op-ed piece she is looking to publish.

But it was when Gabriela joined the Rural and Migrant Ministry’s Youth Arts Group in Poughkeepsie, New York, that she found her calling as an advocate on behalf of undocumented students.

In order to shed light on the challenges facing young immigrants, she seized every opportunity that came her way and was soon profiled in two documentaries: Paper State, a Cannes Film Festival Best Student Documentary by Vassar alumna Elena Gaby, and DREAMers Among Us, a Youth Arts Group film that won Best Short Documentary at the Hudson Valley International Film Festival and the Greater Washington Immigration Film Festival.

“Once you have the passion, the rest follows like a road map,” Gabriela says. That is how she became involved with the Student/Farmworker Alliance, a group of students who work side by side with the Coalition of Immokalee Workers in Florida who fight for the rights of farmworkers.

“My mom worked at a poultry factory for 12 years and so I thought at the time that the conditions endured by factory workers and farmworkers are similar — they both face cruelty, injustice and a loss of dignity,” she said. “Later I realized that although farmworkers are at the beginning of our food chain, they are at the bottom of society.”

“My own journey to documentation in the United States was difficult. I was able to obtain legal status through the Special Immigration Juvenile Status program,” Gabriela said.

To qualify, a person must be under the age of 21, abandoned by one of their parents and needs to have a guardian. Gabriela met the criteria and was able to obtain a green card.

The experience empowered her to commit to help the undocumented population learn about their rights. As a result, during her senior year at Stony Brook, Gabriela realized that she could create her own summer program. That’s when ADELANTE: Student Voices was born (adelante means “go ahead” in Spanish). Gabriela raised $4,000 using a GoFundMe page and $10,000 overall in just six months.

For a week this past summer through ADELANTE, a dozen undocumented students from the Hudson Valley met at Oakwood Friends School to learn about self-advocacy and the arts, how to apply for college and their legal opportunities. Gabriela hired experts to provide workshops on these topics.

“I created ADELANTE because I wanted other students to know about the many college opportunities and laws that are in place to help them with college finances,” she said.

The same year that she founded ADELANTE, Gabriela volunteered to help East End Long Island farmworkers through the Rural & Migrant Ministry, a statewide nonprofit organization that advocates for farmworkers rights in New York State. In that role, she served as an interpreter, performed outreach and coordinated meetings.

“Best of all, I was able to form friendships with the workers and learn more about their lives as farmworkers in Long Island,” she said.

Gabriela now works for the organization as associate coordinator of Western New York, a paid position.

Gabriela realized early on that to make a difference in her newfound homeland, she would need not only an education, but also a way to apply what she learned to help others achieve a better life.

“Knowledge is power,” she says. My entire experience showed me that by working hard, making an effort and being disciplined, I could share my knowledge and create lasting change.”