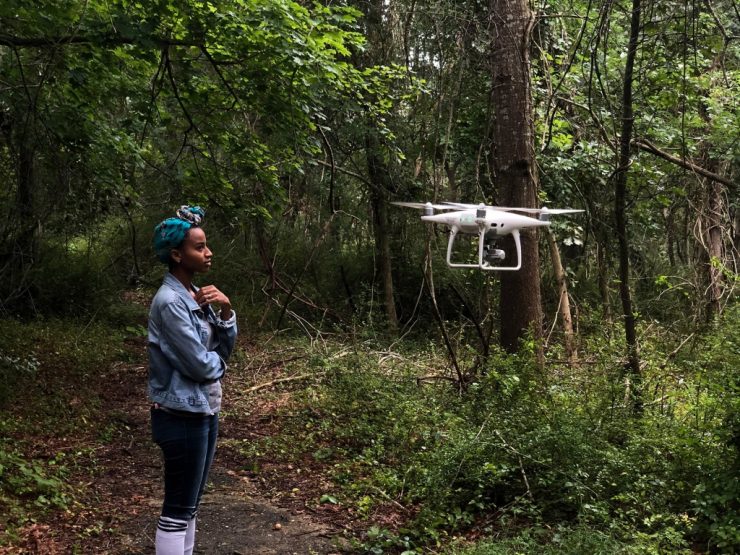 The Long Island Pine Barrens is part of a special ecoregion that begins in southern New Jersey and stretches across Suffolk County and Cape Cod, Massachusetts. It is considered one of New York’s most important environmental resources. A series of reports produced by Stony Brook University School of Journalism students show how and why this ecosystem is essential to the 1.5 million residents who rely on the aquifer deep beneath the trees.

Made possible by a grant to support experiential learning from the MJS Foundation, the reporting project builds on the School of Journalism’s efforts to engage students in real-world reporting experiences outside the classroom — part of the school’s teaching-hospital model of learning by doing. The project is a domestic version of the school’s Journalism Without Walls program, which sends students on overseas reporting trips.

The MJS grant supports the school’s local reporting initiatives to cover timely stories in the public interest of Long Island residents. The pine barrens provided an excellent opportunity for this. These 100,000 acres of forest lay atop the island’s sole-source aquifer, keeping it free of development-related chemicals that have contaminated wells throughout the island.

Students from Stony Brook in collaboration with WSHU Public Radio, spent Summer 2019 investigating the woods and political pressures that would turn 600 acres of them into 118 luxury homes with a private golf course and clubhouse. The stories, which aired from May to September, explain how the 1993 Pine Barrens Preservation Act was written to protect the aquifer and how this one project — the largest proposed in over 25 years — is today testing the limits of that law.

“We are incredibly proud of the high-caliber work these student journalists are producing,” said School of Journalism Interim Dean Laura Lindenfeld. “The Pine Barrens are a vital environmental resource on Long Island, and we believe these reports will help educate local residents of its role.”

Student journalists Taylor Beglane, Margaret Osborne, Kiara Thomas, Desiree D’Iorio, Joshua Joseph and Kiki Sideris, with contributions from Nirvani Williams, spent the summer embedded in the Long Island Pine Barrens region, which spans across the towns of Southampton, Brookhaven and Riverhead. Faculty mentors Assistant Professor Karen Masterson and Lecturer Tania Rashid guided the students. In addition to the radio series for WSHU Public Radio, students produced video and print stories for the NPR affiliate station’s website. Terry Sheridan, WSHU’s news director and lecturer at the School of Journalism, helped oversee and edit the series. In addition, a mini-documentary is in the works that will be submitted to film festivals.

“Our gang operated as professional journalists,” said Masterson, who led the project. “They went to Pine Barrens Commission meetings and town hearings. They explored the woods with ecologists. They spent time with scientists and water experts. Knocked on residents’ doors. Hired a drone. Interviewed developers and environmentalists — often getting the runaround from both. They stuck to it long enough to understand the political game at play and produced fair and balanced stories. You can’t teach this stuff in a classroom.”

Osborne, who led the students, said: “This project was probably the most valuable journalism experience I’ve had so far at Stony Brook. My writing and reporting skills improved beyond what I thought would be possible in such a short period of time. Under Professor Sheridan and Professor Masterson’s direction, I learned how to communicate a complex issue in a way that was easier for people to understand.”

Beglane said: “The opportunity to research and report a topic like this was invaluable. The experience I got from this project will help carry me through anything I do in the future.”

Previously, the experiential learning grant supported School of Journalism students working with East End Long Island newspapers to cover the opioid crisis afflicting local communities, and a trip to Washington, D.C. to cover the “March for Our Lives” for News12 Long Island.

While the Pine Barrens reporting project winds down, a new one is in the works, also led by Masterson, in collaboration with Sheridan and Newsday reporter Zachary Dowdy, who is a lecturer at the School of Journalism. The upcoming series explores slavery on Long Island. Students are examining attempts to preserve this part of the island’s history by reporting on the communities African Americans built alongside Native Americans in 1827, when slave ownership was finally banned in New York. Their stories will show the lasting legacy of the island’s failure to integrate freed people into the economy that they helped build as enslaved people.

“Like the pine barrens project, the work students are doing on the history of slavery is shoe-leather reporting,” Masterson said. “Students are visiting historically black communities, churches and schools. They’re identifying landmarks; investigating archival records at local libraries; interviewing historians and genealogists; and tracking down descendants of enslaved people. Our students are showing through storytelling that, despite 200 years of historical neglect and even intentional attempts to erase this history, enough rich materials have survived to illuminate not only the unique strain of racism and slavery that existed on the island, but also how they have shaped policies that today make Long Island among the United States’ most segregated metropolitan communities.”

Sheridan said of the Pine Barrens work, the students “kept digging and digging.”

“Some Public Radio colleagues heard one of the pieces, complimented it, and then was shocked to hear that it was produced by undergraduates. That was the highest compliment we could have received.”

The Decades-Long Fight To Save The Long Island Pine Barrens (August 26, 2019)