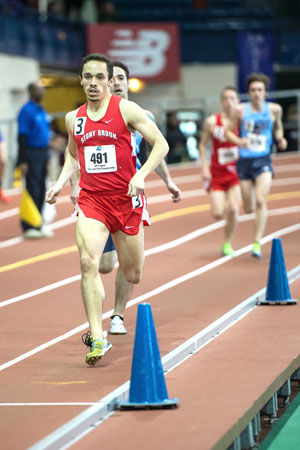 Like his father, Gabe Vazquez ’16 seems destined to mentor young athletes. Growing up in South Ozone Park, New York, Gabe was immersed in urban life, and once he got his feet on the ground, he wasted no time reaching out and helping other city youth discover what they love to do.

Today, his leadership qualities are apparent, whether he is anchoring the Seawolves’ track and field medley relay team or championing the need for education in the inner city.

Ever since third grade, Gabe’s first love was basketball, but he was curious to know what it was about track and field that made that sport his father’s favorite.

“I didn’t know anyone who ran track or heard about any teams in the neighborhood,” he said. He would find out in eighth grade when his dad decided to form a team at his middle school.

“My dad took a bunch of guys from our basketball team, signed us up for our first cross country meet and after that we went on to win the Brooklyn Queens Diocesan Cross Country Championship,” Gabe said, adding that he excelled so much under his father’s tutelage that he decided to drop his beloved hoops to continue to run. He has since never looked back.

Success followed him to Stony Brook, where Gabe is a solid member of both the track and field and cross country teams. As a freshman, Gabe was part of the cross country team that won the Seawolves’ first-ever America East Conference Championship.

Gabe also anchored the distance medley relay (DMR) team in the 2014 indoor track and field Intercollegiate Association of Athletes of America annual men’s competition. The team’s anchor, usually its best runner, is responsible for either holding the team’s lead or making up for ground lost by the other three runners in the four legs of the DMR.

Always looking to improve his technique, Gabe took a 16-hour course and ensuing exam to earn track and field technical certification. He hopes that attention to the little things – a mantra that his coach Andy Ronan is fond of repeating – will help him qualify for the IC4A Championships, as an individual in the mile and in the 1500.

His work ethic and character have not gone unnoticed by Ronan. “Gabe is one of the hardest-working, thankful and polite young men you could ever meet,” said his coach. “Even though he has had his ups and downs with injuries, he has persevered and become a quality Division I athlete on and off the track. He is a quiet but effective leader and many of his teammates have followed his example and become better student athletes themselves.”

As much as he loves being a member of Stony Brook’s Division I teams, Gabe’s passion for helping young athletes get on track with their lives is what provides the most satisfaction for him.

As president of The Supply Chapter, a non-profit organization dedicated to educating urban youth and equipping them with the lifelong tools needed to succeed, he has found his own purpose away from the track. In the Supply Chapter’s first active semester at Stony Brook, Gabe and his fellow club members raised more than $550 during the Lunch for Lenana fundraiser, which was the second-highest total raised in all of the participating schools nationwide.

It was his involvement with The Supply Chapter that inspired Gabe to become a sociology major. “As part of that organization I became aware of social issues that must be addressed and can be solved with the right peoples’ support,” he said. Gabe now manages the Chapter’s social media websites, markets its events and collects, counts and processes the donations it receives.

Gabe also finds time to participate in Play it Forward, where athletes serve as role models by visiting children awaiting treatment at the Pediatric Oncology Unit of Stony Brook University Hospital. “Meeting them and seeing how they go through their daily lives with such poise and grace even though they are faced with such a great struggle at such a young age is an inspiration,” he said.

“I learn from them how important it is to maintain an attitude of gratitude and that helps me remember all of the little blessings I have. That allows me to stay positive when all else seems to be crumbling around me,” said Gabe.