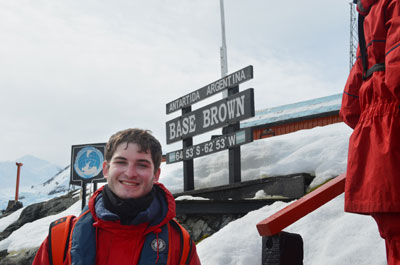 Steven Adelson ’15 is proof that those of us who rely on social media can live without it, at least for a while.

As soon as he finished final exams in December, the Stony Brook political science major headed for the most remote part of the world — Antarctica — where he would have no contact with friends and family for 17 days.

Through a SUNY Brockport Study Abroad program, Adelson joined the expedition with students from other U.S. colleges and universities to observe Antarctic wildlife and ecosystems. The impact of tourism and the upcoming expiration of an international treaty that bans mining could forever change the Earth’s most pristine region. This is what fascinates and deeply concerns Adelson.

“The trip’s focus was entirely on whether or not Antarctic tourism is sustainable for future generations,” said Adelson, who is making this the subject of his undergraduate honor’s thesis in political science.

Aboard the Akademik Ioffe, Adelson interviewed many of the 70 passengers on his excursion to the southernmost continent, including 30 crewmembers, several professors, two-dozen students and three researchers representing Oceanites, a U.S.-based nonprofit scientific and educational organization.

Despite his travel experience, the Plainview, N.Y., native had never been on a boat before, making his journey from Ushuaia, Tierra del Fuego, Argentina to the Antarctic Peninsula no easier. The ship’s course included traversing the Drake Passage, known as the roughest waters in the world due to the convergence of extremely cold and warm waters.

“We were lucky,” he said. “Our expedition leader told us that our passage difficulty was a three on a scale of ten. Still, I felt seasick on the way there and wound up wearing a patch on the way back. Things were falling off of tables and it was difficult to take a shower.”

Adelson made this journal entry upon first sighting land as the ship approached the coldest, driest and windiest continent on Earth.

The time is 4:05 am and for no apparent reason I am awake with no desire to return to slumber. Land is visible for the first time in all directions, as mountainous ranges protrude from the grey skies of densely packed clouds. The only sounds to break the silence come from beneath, as the ship breaks easily through thin sheets of sea ice, or the clusters of Gentoo Penguins atop the smaller icebergs diving into the clear waters as they see our ship. The Akademik Ioffe is not the first ship to attempt these waters this season but there is hope it will be the first to do so successfully. The Lemaire Channel is a strait no wider than two of our ships. With the bounty of icebergs awaiting us, it had been estimated by other unsuccessful ships in previous weeks that mere inches may determine a successful traversing of the Channel.

Sustainability was the focus of the trip, so Adelson and his shipmates received on-board education on the importance of pre-cleaning their gear to prevent non-native species from contaminating Antartica, as well as international guidelines for observing wildlife during excursions.

Such sanctioned excursions for Adelson included three trips to the Continent itself and another eight to the many islands surrounding it, all by Zodiac boat. One guideline emphasizes that tourists must keep a 15-foot distance from penguin colonies and an even greater distance when the birds are traversing “highways” looking for ocean krill to feed their newly hatched chicks.

“A lot of us onboard were adamant that we were not violating the guidelines while onshore but we all had unconsciously violated some of them because we were so in awe of what we were seeing, Adelson said. “Some of us were able to self-correct while others were not. Penguins would just waddle right up to us and stare at us for minutes. They were very curious. I would sit in the snow in complete silence for a half hour, in heaven.”

Other highlights of the trip included camping on an island overnight and body sledding down a 15-story embankment.

“When we camped, we dug holes for our sleeping bags so we wouldn’t feel the wind as much,” Adelson said. “I was the only person who couldn’t sleep so I got to observe the seals and penguins going about their business at three in the morning.”

The 24-hour daylight threw off Adelson’s sleep patterns so much he kept his curtains closed while on ship.

“I often gave up on sleeping and just embraced the experience,” he said.

He also experienced extremes in the weather; from single digit temperatures in layered clothing to one 60-degree day in shirtsleeves — and relative calm to a full blizzard during his last trip ashore.

Adelson finally returned home December 30 to find a boatload of emails and updates waiting for him to sift through. That could wait a day. After perfunctory greetings to his mother and sister, he did what he had been too exhilarated to do much of in Antarctica — sleep.