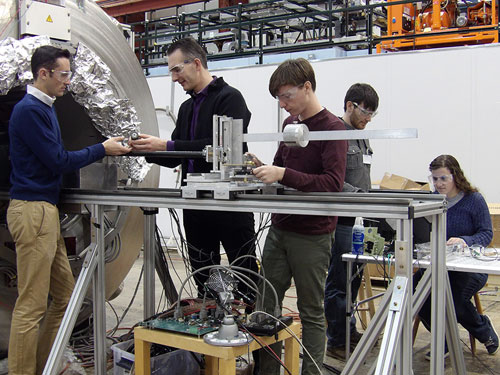 In December, five students from Stony Brook University and their research professor, Nils Feege, loaded a prototype of a magnetic cloak into an SUV and set off for the U.S. Department of Energy’s (DOE) Argonne National Laboratory, nearly 900 miles away.

The magnetic cloak isn’t a magical garment, but rather a crucial piece of equipment for a possible next-generation particle collider to study nuclear physics.

The proposed Electron-Ion Collider, by smashing beams of electrons and protons together at near light speed, would be the most powerful microscope yet developed for understanding how the mass of the proton is dynamically generated from the interaction of quarks and gluons, and in doing so help illuminate the forces that account for the mass of the visible universe.

Such a facility works by directing beams of particles along a track. At the end of the track, the particles collide, and detectors use magnets to pick up the readings from these collisions.

But the incoming particle beams have to be protected from these detector magnets, or else they will be disturbed. So Feege and his team needed to build a cylinder with two counterbalancing layers that would shield the beams from the magnetic field of the detector near the collision point without distorting the rest of the field.

“A superconductor pushes out magnetic field lines, while a ferromagnetic material around it will pull in the field lines; so if you get it exactly right, it will create a field-free tunnel and cancel all outside disturbances,” Feege said.

This creates an area in the detector that is invisible to the magnetic field — like Harry Potter’s invisibility cloak, except for magnetic fields instead of light.

“The other beauty is that it’s passive, which means that it doesn’t require external electrical current. It’s a very elegant solution if you can work it right,” he said.

Feege and his students spent nearly three years building their prototype at Stony Brook. Initial tests looked promising, but they needed to do a full-scale test in a strong and uniform magnetic field that was large enough to fit the device itself while leaving enough room to measure the field around it.

Hence the road trip to Argonne, where the team came to be the first visitors to use a new facility built by Argonne’s high-energy physics division called the 4 Tesla Magnet Facility.

Built out of a recycled hospital MRI magnet to test detector components, the Magnet Facility offers strong, uniform magnetic fields plus a giant hollow center — the only one in the country large enough to accommodate the cloak tests.

“Their setup was extremely useful for our measurements — it allowed us to easily position our sensors and map the magnetic fields,” Feege said.

Happy with the initial results, Feege and his co-lead, Stony Brook professor Abhay Deshpande, are moving forward, talking to accelerator scientists to discuss how the cloak could be integrated into a future collider design.