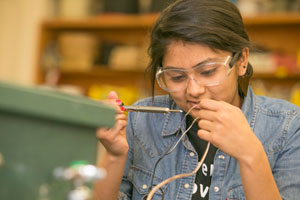 When electrical engineering major Saba Khalid ’15 recently received a prestigious engineering fellowship, she was ready to hit the ground running.

The organization Epicenter: National Center for Engineering Pathways to Innovation selected Saba as a University Innovation Fellow (UIF), along with 122 other students from 52 other higher education institutions in the country.

The National Science Foundation provides funding for Epicenter and the UIF program. The Fellowship is run by Stanford University and the nonprofit organization, VentureWell.

The UIFs are a national community of students in engineering and related fields who work to ensure that their peers gain the knowledge, skills and attitudes required to compete in the economy of the future. To accomplish this, the UIFs advocate for lasting institutional change and create opportunities for students to engage with entrepreneurship, innovation, creativity and venture creation at their schools.

Following students’ acceptance into the program, schools fund six weeks of online training and travel for students to the University Innovation Fellows Annual Meetup in Silicon Valley. Saba returned from that experience in February after taking part in experiential workshops and exercises at Google and Stanford University.

Saba and the other UIFs were selected on the basis of their entrepreneurial club and organizational work, ability to host events and work with faculty to create courses or activities at their respective schools.

The East Elmhurst, New York, resident has worked for the past year as a project assistant with architects, design engineers and contractors to plan, create and recommend designs for renovating residence halls at Stony Brook.

Saba initially learned about becoming a UIF through the WISE (Women in Science and Engineering) listserv and received a scholarship for the training from VentureWell, which runs the UIF program.

Saba’s leadership skills have helped bring about change at Stony Brook in other ways as well. In addition to being a member of the WISE Honors Program at Stony Brook, Saba was the president of the Stony Brook Chapter of Engineers Without Borders, which received the Most Outstanding Organization Award (best club on campus) at Stony Brook University out of 250 student organizations in 2014.

Saba has made wise use of her breaks from academia in gaining valuable real-world engineering experience. She spent the summers of 2012 and 2013 interning with National Grid in Hicksville, New York. And in 2014, she worked for GE-Transportation, designing and building test harnesses for various smart digital sensors for preproduction Tier 4 locomotives.

Now it is time for Saba to test her own ideas. Stony Brook faculty advisors Dr. Komal Magsi and Carrie-Ann Miller have given her valuable guidance and she is working with Professor Imin Kao, associate dean of the College of Engineering and Applied Sciences, to implement her projects and plans on campus.

During her six weeks of online training through the UIF program, Saba received the basic tools to carve out her own ideas on those projects —utilizing strategies such as the Landscape Canvas, Business Model Canvas and Lean Startup methodology.

As part of a three-part action plan to advance entrepreneurship and initiate institutional change, she also created her own design competition she named the Catalyst Challenge.

“Every engineering student has a desire to work with his or her hands and is limited in doing so during their four years of college,” she said. “This competition would provide students with the opportunity to do so and create a product they are invested in and can passionately market, with the intention that at the end they could be a CEO of their own company.”

Saba’s first action plan, aimed at facilitating faculty-student interaction and partnerships, would be to hold a town hall-style meeting with College of Engineering and Applied Sciences leaders and students once per semester so that both parties can voice their concerns and have their questions answered.

For her second venture, Saba is in the process of selecting her own team, made up mostly of freshmen and sophomores, to help launch the Challenge, set for this fall. The teams would build and design their products during the course of a weekend and a panel of judges would rate them. The highest-rated team would win a cash prize to help implement its idea; a team member will then present it at TEDxSBU, the annual October talent showcase for students, faculty, staff and alumni.

The third action plan is already under way at Stony Brook — the development of the Innovation Lab — a multidisciplinary space in which students have access to multiple resources, such as hardware tools and sculpting supplies.

“I chose this because it is something identified with every successful company,” Saba said. Ideally, the space would hold monthly seminars highlighting an emerging field and displaying a startup of the week to stoke student creativity.

When she envisions her future beyond Stony Brook, Saba dreams big. “I am extremely interested in renewable energy and the potential it holds for the future,” she said. “I want to make solar power a viable source of power generation.”