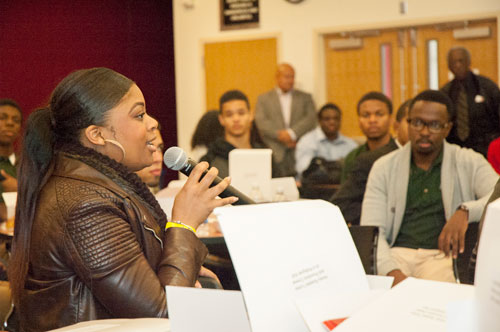 Stony Brook University’s African American Brotherhood (SAAB) hosted a summit at Nobel Halls on October 31 in collaboration with Kingsborough Community College (KCC) to help young men of color transition from the community college environment to a four-year university and a professional career.

SAAB brought in distinguished faculty and staff from Stony Brook, Suffolk County Community College (SCCC) and Drexel University to provide the historically underrepresented group of KCC students ample wisdom for succeeding during and after college.

As diverse as their dreams are, these African American and Latino students share the same goal of personal success. After hearing their hopes, Watson set the summit’s tone.

“There has to be accountability,” said Watson. “Now you have an obligation to fulfill your goals.”

Experts and students at the summit tackled “code switching,” exploring how to leverage multiple cultures and languages in a professional setting.

Christina Vargas, Stony Brook alumna ’90, ’93, former director of Diversity and Affirmative Action at Stony Brook and current Affirmative Action officer and Title IX coordinator at SCCC, said she will sometimes code-switch when “behind closed doors with friends and family,” and to connect with individuals who wonder whether or not she speaks Spanish. But no matter the code, Vargas said she is always conscious that she is a Latina when she goes into a meeting.

“You have to know how to help your career without losing your identity,” said Rayna Simon, assistant to the Dean of the Graduate School. “I used to talk with my hands more, but I assimilated into the office climate. I answer the phone professionally. Instead of saying ‘Hey girl,’ I say, ‘Hello, how are you?’ ’’

SAAB President Roger Carson confessed that when he first met his advisor Watson, he had a difficult time transitioning between professional and familiar conversation.

But not all code switching is conversational. Carson added that if you are not open-minded, you will miss professional opportunities.

“I belong to SAAB, but I’m also an engineer and an RA. I belong to all of these cultures. You will find a family everywhere. You make a lot of friends who don’t look or talk or walk like you but they’re all friends,” Carson said. “We’re all humans at the end of the day.”

Brian Mitra, assistant dean of student affairs at KCC and Stony Brook alumnus, said that although he is a Filipino, he pledged a Latino fraternity while here.

“That is how you grow and get out of your comfort zone,” Mitra said.

Sometimes, Carson explained, there is another type of problem. “You might have to switch codes with your own people when they get too familiar in a professional setting.”

Aldustus Jordan, EdD, associate dean of Stony Brook’s Medical School, cautioned the students not to make the mistake of becoming too familiar with someone simply based on their appearance.

“Even when good friends of mine do the whole ‘brother thing’ when we’re in a professional setting, I might have to let them know it is inappropriate,” he said.

While all of the panelists stressed the theme of solidarity, they also emphasized the importance of self-reliance.

“I’m a firm believer in the power of one,” said Jordan. “You’re powerful collectively but you’re also powerful individually. Keep that in mind and you’ll go a long way.”

Rodney Morrison, associate provost of enrollment and retention at Stony Brook, revealed some sobering statistics. While 15 percent of Latino and African American undergraduates are getting BA’s, only six percent are getting top entry-level jobs, he said.

As a graduate of the Wharton School of the University of Pennsylvania (the world’s oldest collegiate business school), and one of few African Americans on staff when he worked at major investment bank Lehman Brothers Holdings Inc., Morrison urged the KCC students to not just graduate, but also to become entrepreneurs.

“Although people of color make up 30 percent of the population, we only comprise three percent of senior corporate leaders,” said Morrison. “If you are a leader, you’re hiring more leaders. We need more of you to become leaders.”

KCC student Mathew Galarza summed up what he and fellow students from the KCC Men’s Resource Center gained at the event.

“The program was very impactful on me and my peers. The opportunity to meet with brothers who come from the same communities as we do and are now thriving at Stony Brook was inspiring.”

— Story and Photos by Glenn Jochum