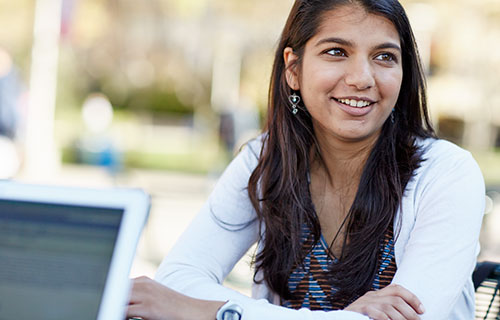 Shah, the inventor of an all-natural mosquito repellent designed to combat disease in third world countries, is also a CEO of her own social entrepreneurship company, a nationally recognized cancer researcher and a journalist published on a national news network. Her goal is to “inspire others to follow their ideas until they become realities.”

While at Stony Brook, Shah has:

The Ronkonkoma, NY resident is majoring in biology and minoring in journalism. A 4.0 student, Ruchi is Stony Brook’s Homecoming Queen, has given a TEDxSBU talk and was invited as the youngest speaker at the inaugural Forbes Women’s Summit. She serves on the board of the Hindu Student’s Council, was a founding member of SBU Camp Kesem (a free summer camp for children impacted by a parent’s cancer) and is a student ambassador. Shah was recognized as one of the 22 under 22 most inspiring college women by Her Campus.

She will be attending Stony Brook’s School of Medicine next year and is pursuing a career as a physician and medical correspondent.

Two years ago, when Ruchi was selected to give one of the inaugural TEDxSBU talks, she availed herself of the programs offered by Stony Brook’s Alan Alda Center for Communicating Science. The results can be viewed below.

“After the talk, a fellow student came up to me and said he had an 11-year-old sister who was interested in science and he couldn’t wait to go home and show her the video of my talk,” said Ruchi. “That is why I’m sharing my story.”