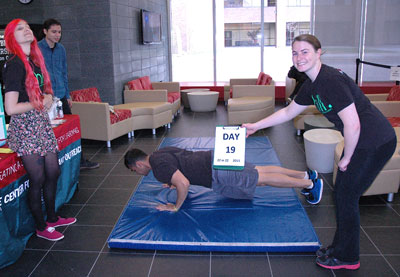 Anyone who enjoyed a workout at Stony Brook’s Campus Recreation Center in April had to pass right by Emma Tulip’s display in the lobby — and possibly add another 22 pushups to their workout regimen.

The event she was promoting — “22 in 22,” known more informally as The Pushup Challenge — is a reminder that an average of 22 veterans take their lives every day in the United States. Emma and other college students throughout the nation are hoping to reverse that trend by creating better support services and increasing awareness of our veterans’ plight.

Emma ’16, a Health Science major and CHILL Peer Educator, first heard about “22 in 22” from SBU graduate and CHILL member Alexandria Imperato, who is now in her first year of medical school at Stony Brook. CHILL internships, offered by the Center for Prevention and Outreach, focus on mental health and wellness. She did some research and learned that other universities were doing different variations of “22 in 22” and holding similar events.

Emma was moved to take action because she has a cousin in the marines who just returned from Afghanistan as well as friends who are serving in the military.

Emma didn’t just play the drill sergeant, however. She got right down on the mat on a daily basis to practice what she preached, only missing one day due to a doctor’s appointment. All told, she amassed roughly 50 hours planning and supporting the event.

She also had plenty of help, beginning with the Campus Recreation staff, who allowed her to reserve space in their lobby and provide her with a table and mats. Chill educator and psychology major Cassandra Nikac ’15 volunteered to help three days a week as did Bioethics graduate student Katarina Norte, who posted a video of her pushups to the “22 in 22” Facebook page.

Emma estimated that she and Katarina performed at least 968 pushups and that Stony Brook students totaled more than 6,000 throughout the event. Campus Tours brought more than 300 prospective students by to explain the purpose of the event and Counseling and Psychological Services/Health Science Center services available on campus. The Long Island State Veterans Home helped support the event by posting information on its website.

“I’ve reached more than 1,000 people with this information and knowledge is power,” Emma said. “Maybe the heightened awareness will lead to an increase in donations to organizations that support veterans’ needs and help bring attention to the large number of returning veterans who are now non-traditional students in colleges who need our support.”

— Story and photos by Glenn Jochum