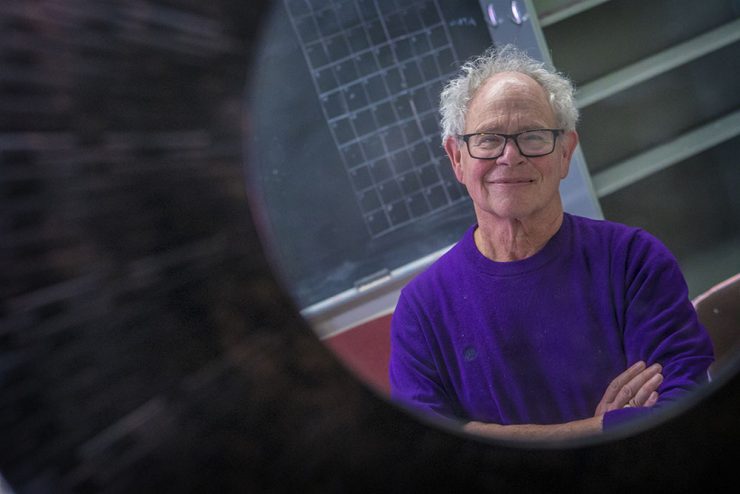 This past February, 72-year-old Jonathan Sinnreich of Mount Sinai passed his history exams “with distinction,” which meant that he completed his degree requirements as a PhD candidate. Only his dissertation remains before he earns a doctorate in philosophy at Stony Brook University.

His son, Aram Sinnreich, wasted no time in posting congratulations to his father on social media; his daughter Rachel Cleves proudly re-tweeted the post. Both Aram and Rachel are tenured academics who are well aware of what it took achieve this goal.

Today’s inspiration: my dad, who at the age of 72, just passed his rigorous PhD comprehensive exams in philosophy at @stonybrooku with distinction — the first person to do so in over half a decade! May we never stop learning and growing.

Even though he downplays the significance of his achievement, preferring to think of it as “one more stop in his intellectual magical mystery tour,” Sinnreich’s accomplishment is impressive, coming at the end of a highly successful legal career. He juggles his academic endeavors with a part-time practice at the Central Islip firm Sinnreich, Kosakoff and Messina LLP. He served as independent outside attorney to the Town of Oyster Bay for many years and testified as a witness for the prosecution in the recent federal corruption trials of former Oyster Bay town Supervisor John Venditto and former Nassau County Executive Ed Mangano.

In 1968, Sinnreich earned his Bachelor of Arts degree at St. John’s College in Annapolis, which Sinnreich describes as “a four-year philosophy program.” However, a career in law beckoned and Sinnreich passed the bar exam after graduating from the University of Virginia  School of Law with his J.D. in 1974.

“You can do almost anything with a philosophy degree — I read a statistic somewhere that philosophy majors do better than almost anybody else in a variety of fields,” he said.

In fact, Sinnreich heeds Socrates’ famous admonition that “the unexamined life is not worth living,” which is as close to a religious creed as the septuagenarian academic gets.

“I am finding that so much of what I am reading concerns the subject of ethics and leading the moral and good life, and that that has made me much more sensitive to and aware of the ethical dimensions of my actions and my effect on others and the world around me,” Sinnreich said. “I find that all of the faculty and my fellow students are deeply concerned with these issues both for themselves and the world and that has moved and impressed me.”

It also has led him to find special value in Aristotle’s theory of virtue ethics, which focuses on what it means to be a good person for your own personal benefit and the benefit of your community.

Immersed though he is in becoming a better person, he refuses to take himself too seriously. “I have always been something of a dilettante, what the French called a flaneur, and I see it as a personal flaw and am not proud of it,” said Sinnreich.

“Both religion and philosophy ask the same central questions about the nature of being and existence and the right way to live,” Sinnreich said. “I think religion can still be a vehicle for serious philosophical reflection, but it has to overcome its tendency to enforce orthodoxy and dogmatism and its resulting intolerance.”

Stony Brook appealed to Sinnreich not only because of its proximity to his Mount Sinai home, but also because it offers the Senior Auditor program, which served as a doorway to a doctoral degree. Adults who are 60 years of age and older may audit most New York State-funded, credit-bearing courses offered at Stony Brook during the fall and spring terms on a space available basis and subject to permission of the instructors.

Sinnreich is also teaching an undergraduate course at Stony Brook in Fall 2019 on Philosophy of Law.

With a full and rewarding career on his resume, and full plate of challenges still in front of him, what else remains on his bucket list?