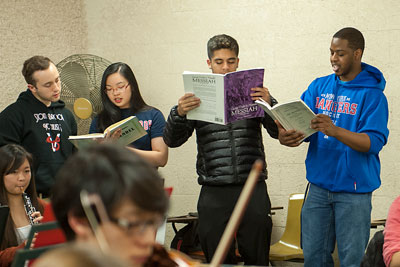 Daniel Nwatu’s roots run deep. He is the son of immigrants who grew up in war-torn Nigeria, whose only dream was for a better life in America.

Daniel, who will be graduating in 2016, shares that dream — in fact, he embodies it. Growing up as he did in rough neighborhoods on Long Island and New York City was still a vast improvement over the poverty and hardship his parents experienced seeking refuge from the ravages of civil war.

Lacking basic necessities and often living on government financial assistance programs did not deter Daniel from seeking the education that would make a new lifestyle possible.

“My parents told me I could be anything I wanted, often using a doctor or the President of the United States as an example,” he said. “They taught me that education was the key to achieving this.”

“Ever since I was a toddler, all I can remember is wanting to be a doctor,” Daniel said. “My parents have pictures of me dressed up in a physician’s coat and playing with a stethoscope.”

“I knew I had to become a doctor to help people and save lives,” Daniel said.

As a high school senior he began an internship with Elmont, New York, urologist Dr. Carlton Barnswell, who has been Daniel’s mentor ever since.

“He is like a second father to me,” said Daniel. “We grew up under similar circumstances, and hearing his history inspired me to keep reaching and pushing forward. His family is from Jamaica and he grew up in the Bronx without much.”

Dr. Barnswell invited Daniel to become a lead researcher in an ongoing study about the incidence of prostate cancer in African-American and Caribbean-American men.

Learning that men of color are at double the risk for being diagnosed with prostate cancer inspired Daniel to explore multiple factors for the disease, including genetics, the environment and lower rates of prostate screening in developing nations.

The Hempstead, NY resident hit his stride when he arrived at Stony Brook and became a member of the Student African American Brotherhood (SAAB) in Fall 2012. It wasn’t long before he found another mentor: Jarvis Watson, EdD, senior counselor and academic advisor of EOP/AIM, and SAAB’s lead advisor.

Daniel is an active participant in many SAAB community service projects. He participates in tours for area high school students and programs such as “My First Day at College,” where students from local high and middle schools come to campus to learn what campus life is like.

Music has always played a major role in Daniel’s life as well. As a singer and pianist he has embraced R & B, gospel, Broadway, jazz and classical music. At Stony Brook, his bass-baritone voice graces the Gospel Choir and University Café jazz nights.

In addition, every December he performs as a soloist in Handel’s Messiah, backed by members of the University Orchestra at the Staller Center Recital Hall.

“When I become a doctor, my schedule will be very, very busy, but one way or another I will find a way to incorporate music into my everyday life,” Daniel said.