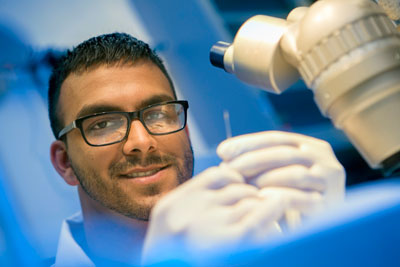 Stony Brook pharmacology major Mohammed Ahmad ’15 couldn’t make up his mind whether he wanted to pursue a career in healthcare or engineering/technology when he graduated from high school.

After listening to the experiences of his cousin, who was an Army staff sergeant, Mohammed paid a visit to a recruiter and signed an eight-year contract as a specialist in the U.S. Army Reserve, which offered a monetary incentive and educational benefits.

Upon returning from basic training in 2009, Mohammed attended Suffolk Community College, where he completed his associate degree in three semesters and made up his mind to pursue medicine at Stony Brook University.

“It was a deal I couldn’t refuse,” said Mohammed. “It afforded me the opportunity to defend the country I call home.”

As an Army Reservist, Mohammed’s minimal obligation is to train one weekend per month and at least two weeks in the summer. Having completed his initial six-year obligation he is now eyeing 20 years as a reservist.

Since Mohammed has matriculated at Stony Brook, his time management skills have been in overdrive. He served as president of the service organization Alternative Spring Break Outreach; co-published his research findings with Irene Solomon, a professor in the Department of Physiology and Biophysics; participated in three URECA presentations; interned at the Stony Brook Academic and Transfer Advising Services; served as a resident assistant at Benedict Hall; taken part in the Study Abroad Rome-Italy program, is enrolled in the fast-track MBA program, and worked at the Department of Emergency Medicine at Stony Brook University Hospital as an academic associate.

As an academic associate, an unpaid internship, Mohammed is often mistaken for a doctor. “It’s the white lab coat,” he said.

His task is to screen patients based on their chief complaints and if relevant, dig deeper into their files, often consulting a physician to see if they are eligible for enrollment in research studies taking place in the Emergency Department.

Mohammed’s research centers on how inflammation affects breathing. “Since inflammation is involved in almost all diseases and injuries it’s an important topic of study,” he said. “We hope to publish a few papers about it soon.”

Mohammed aspires to be a surgeon or a physician in the U.S. Army. “I want to practice medicine because I am very interested in the sciences and how much we truly don’t know,” he said.

“I want to learn as much as I can about business and healthcare,” he said. “I would love to go to medical school at Stony Brook and someday open healthcare clinics around the world.”

Mohammed’s religious beliefs have influenced his decision to pursue medicine and military service. As a practicing Muslim, Mohammed said he follows the teaching that “whoever saves one [person] — it is as if he has saved mankind entirely.”

Mohammed said that he felt it was his obligation to give back to the country that has given him so many opportunities and the secure life that he has been blessed with.

“On my 18th birthday I took it upon myself to gain the knowledge and skills I needed to become the best soldier I can be and protect my friends, family and neighbors. I chose medicine because I have a desire to help patients regain their health,” he said.