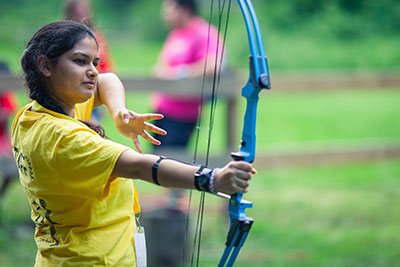 Human behavior fascinates Dhara Doshi ’16. The psychology major with a minor in biology traces that interest back to her middle school days when one of her classmates exhibited behavior associated with Asperger’s Syndrome, which at the time was just becoming part of a national scientific dialogue.

“No one really spoke about it then and I had no idea what it was,” she said.

As time went on, Dhara’s curiosity about Asperger’s grew. When she came to Stony Brook, she studied the condition extensively. But the more she researched, the more motivated she became to learn what her former classmate had experienced, so she made it the subject of a class project.

In her digging, she learned about the work being done in Matthew Lerner’s Social Competence and Treatment Lab at Stony Brook, so she applied to become an undergraduate assistant and was accepted.

In the lab, undergraduate research assistants perform electroencephalograms, which detect abnormalities in brain waves or electrical activity in the brain. In a painless, harmless procedure, the researchers attach electrodes to a cap and then place the cap on the participant’s head. The electric charges appear as graphs on a computer screen, allowing a qualified PhD student or principal investigator to interpret the readings.

“The lab is great because we can look at children’s social skills and see what improvements can be made that will best help each child. With autism, there is such a wide range of diagnoses,” said Dhara, whose involvement is not limited to research.

She also recruited participants for research studies on and off campus by tabling, phone calls and distributing flyers. To keep up with the latest developments and to stay in touch with children and their families affected by the disorder, Dhara attended conferences on campus and all over Long Island.

Before she studied with Lerner, Dhara spent a semester immersed in Psychology Professor Harriet Waters’ lab, where she applied her classroom learning to real-life situations involving mother and infant attachments. She transcribed a graduate student’s interviews and she and her lab partners coded for keywords and phrases that displayed different levels of attachment.

Dhara is exploring careers in sports medicine and orthopedics. To round out her medical knowledge, she has grabbed every internship opportunity she could. “Internships give you an idea of what to expect if you decide to go into that particular field,” she said.

Her internship as an academic associate in the Department of Emergency Medicine enabled her to observe doctors, nurses and aides in an everyday setting, talk with a wide range of patients, and learn to scan charts to see if the patients fit study criteria.

Dhara is a University Scholar and member of the Sigma Beta Honor Society. She fine-tuned her leadership skills by interacting with thousands of incoming freshmen, volunteered at the Child Psychology unit in Stony Brook Medicine, served on the Student Health Advisory Committee, and was a counselor at Camp Kesem, which serves children whose parents have been affected by cancer.

Her favorite volunteer experience in the community took place in the spring of 2014 at Pax Christi Hospitality Center, a 25-bed emergency shelter for men over the age of 16, located in Port Jefferson, New York.

“A man at the facility needed a pair of boots because his had been damaged,” said Dhara. “One of the volunteers had a new, never-worn pair of boots that he bought, and realizing they didn’t fit him he gave them to the man. That exchange really epitomized the outreach Sigma Beta is able to do.”

Along with the outreach, Sigma Beta stresses high achievement, whether it is on or off campus. That ideal works well with that of being a University Scholar, which emphasizes community service, leadership and academic excellence.