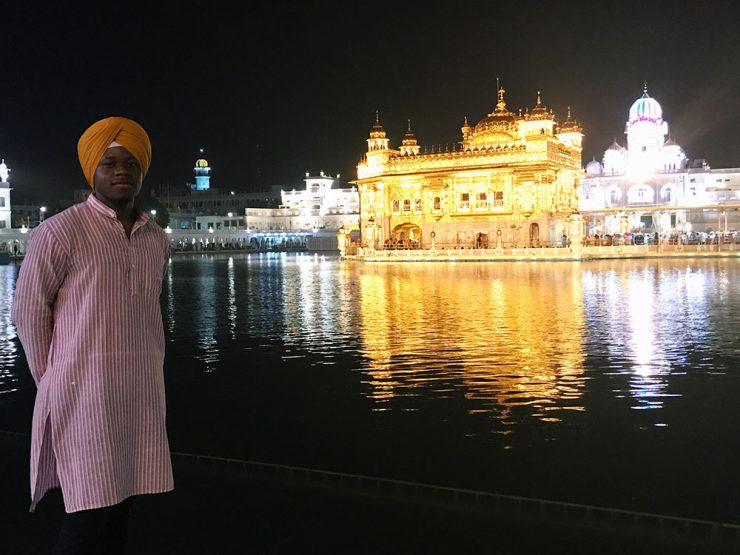 Major scholarships won by high-achieving undergraduates — with the help of Stony Brook’s world-class mentoring programs — can propel young scholars along exciting career paths, on the road to even greater things. The four alums profiled below have leveraged academic honors achieved at Stony Brook to build careers with potential global impact.

Sam Katz
A Fulbright U.S. Student Program scholarship afforded Sam Katz ’13 the opportunity to conduct biomedical research at the Berlin Institute for Medical Systems Biology (BIMSB) in Germany. He is now immersed in his final year of PhD study at the National Institutes of Health (NIH) and the University of Cambridge. His BIMSB project was titled “Identification and Characterization of Skin Cell Inducer and Associated Regulatory Factors, which focused on “Direct Reprogramming,” a novel approach to looking at ways to convert a mature cell into another without making the cell behave like a stem cell first.

“My experience during the Fulbright instilled in me an appreciation for internationally collaborative science,” said Sam.

The program at NIH-Ocam, he added, is highly competitive, featuring collaborations among three of the premier medical institutions of the world. It employs a self-directed model in that students are not required to take any classes or do rotations across labs.

Sam chose to do his research in an NIH laboratory that studies how the body controls inflammation. “This is a very important process by which we fight infections but when the response is excessive it can be very harmful,” he said. “My thesis project is exciting because it brings together the research I did in my undergraduate degree and the work I did during my Fulbright year.”

Sam’s Stony Brook degree was in biochemistry but he is grateful for the classes he took in theatre arts there as well. “I learned a lot about how to communicate my story and how to get an audience to go along on a journey with me,” he said.

“That was a complete dream come true,” she said. “The scholarship supports my graduate education and prepares me for a career in diplomacy and international development.”

The tone was set at Stony Brook, when the former psychology and sociology major and first-generation American born to Indian immigrants was invited to participate in the selective JFEW SUNY Scholars Program in International Relations and Global affairs. That provided her with a paid internship at the Global Partnerships Forum in New York City.

She also made use of her undergraduate research experience in the Stony Brook Hospital’s Department of Obstetrics, Gynecology, and Reproductive Medicine to win the State Department’s Benjamin A. Gilman International Scholarship. As a result, she traveled to Madagascar to examine the sexual and reproductive health of women in three rural villages with support of the Centre ValBio Research Center.

This summer, Michelle will embark on an internship with United States Agency for International Development (USAID) as a health development officer in Ghana.

“Through courses and research at Stony Brook, I discovered my passion for global health, and specifically women’s health,” she said.

Kennedy elaborated: “Two years ago, barely a month after graduation and the completion of four memorable years at Stony Brook, I packed my bags and went off to India, a vast, energetic kaleidoscope of a country that I had never been to before.”

His plan was to study Hindi through CLS and gain familiarity with the cultural landscape of the subcontinent and in doing so, realize his ambition to engage in international development work in emerging markets.

Within the short space of eight weeks, Kennedy had learned to read, write and speak Hindi with proficiency and cultivated a sense of confidence in his own abilities to dream big and bring those dreams to fruition.

After returning from India, Kennedy began working full-time at Skanska, a multinational construction and development company and joined its Core Competency Training Program, a two-year rotation scheme that exposes rising talent to the various functions and roles within the construction business.

As a result, he has helped construct numerous public infrastructure projects within the Greater New York City area, including airports, train stations and bridges, building meaningful relationships within the industry.

“My exposure to foreign cultures, through my background as an immigrant and person of color as well as my CLS experience, have given me a lifelong appreciation for diversity,” he said. “At Skanska, I have advocated for a more inclusive workplace culture by helping to organize and attending recruitment fairs focused on engaging talent from underrepresented schools and ethnic backgrounds, even returning to Stony Brook University, where we connected with students and discussed career opportunities within our organization.”

Kennedy has recently moved to an office in Boston, strengthened by the conviction he can thrive anywhere.

Neha Kinariwalla
Neha Kinariwalla graduated from Stony Brook with a bachelor’s degree in sociology in 2014 and went on to earn her Master of Philosophy at Cambridge University as a Gates-Cambridge Scholar. She is currently a medical student at Columbia University.

“I conducted research at Oxford University the summer after my sophomore year,” Kinariwalla said in an interview. “It was pertaining to destigmatizing disease but I felt that work was too restricted to the ivory tower, so I started an organization to bridge an academic gap.”

In the summer between her second and third years at Stony Brook, Kinariwalla founded the Humanology Project, an organization that works to challenge misconceptions regarding mental illness by providing a medium for patients to share their perspectives and form an online community. By the end of 2013, more than 30 articles covering 12 illnesses had been published by 17 contributors receiving internship college credit through Stony Brook.

By early in 2014 the Project garnered more than 3,000 page daily hits from more than 15 countries. The Project has been featured in Forbes, TEDx, the Huffington Post, Vogue India and many more publications.

Neha is currently the executive director on the Project’s board of directions and oversees a group of Stony Brook students who run its daily operations.

“As a medical student now I am seeing just how much people want to understand what’s happening to them. Humanology serves as that bridge and gives patients the information they need. It’s all about communication,” she said.

“Previous recipients of high-stakes awards are vital to my advising efforts,” said Jen Green, External Scholarships and Fellowships Advisor. “Current students need to see that Stony Brook has been incredibly successful in these competitions and that these opportunities aren’t just sources of funding, they are game changers in terms of one’s overall professional development. Michelle, Sam, Neha, and Kennedy are a testament to this, and I am incredibly grateful that they take time from their hectic schedules to mentor SBU students considering external scholarships and fellowships.”