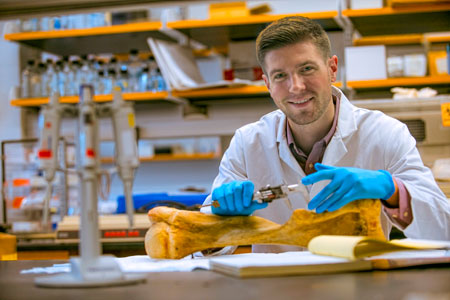 It’s fitting that Lukas Vasadi ’16 was one of six students honored at the Stars of Stony Brook Gala in New York City last May. Lukas has had his head in the stars since he was old enough to remember.

“I was a self-proclaimed nerd, spending the majority of my afternoons pretending to be an astronaut or Jedi Knight,” said the Stony Brook University senior. “I was a huge Star Wars fan.”

His mother encouraged him. “She made me a pair of ‘moon socks’ from a pair of my dad’s socks with craft supplies. I ran around the house pretending that I was leaping across the surface of the moon,” he said.

No wonder then that Lukas was over the moon when he was one of 20 annual students nationwide chosen to receive an internship at the NASA Johnson Space Center in Houston, Texas, this past summer. Applicants were subjected to several rounds of rigorous screening and committee reviews of their social media profiles.

Because of Lukas’ interests and background, his application was sent to NASA’s Bone and Mineral Lab, where he was assigned to work with Jean Sibonga, an expert in space-related bone physiology.

The main focus of his internship was to analyze and interpret data from a new testing method that measures changes in the structure of the trabecular region (spongy bone). Bone deterioration has been the primary health concern associated with spaceflight.

“Without exercise or pharmaceutical intervention, in the microgravity environment astronauts lose significant bone mass, which increases their risk for fragility fractures and premature osteoporosis,” said Lukas.

In addition to working in the lab, Lukas attended lectures where he learned about NASA’s plans to send humans to Mars and of the rocket technology developed specifically for that mission.

He toured the robotics lab, mission control and the Neutral Buoyancy Lab, where astronauts train for space walks. “I formed friendships with people who may become my colleagues,” said Lukas.

Stony Brook had provided a strong foundation for his NASA experience. In order to contribute to the internship projects he was assigned, Lukas required a solid understanding of bone biology, which he had gleaned from Clinton Rubin’s lab under the supervision of PhD student Danielle Frechette.

“Frechette’s research focus is on the effects of high-fat diets on stem cells in the bone marrow,” said Luka. “These stem cells are responsible for rebuilding damaged bone tissue and maintaining normal fat concentrations within the marrow; however, a high-fat diet causes these stem cells to favor differentiation into fat cells over bone-forming cells, which leads to weakening the bones that support body weight.”

Lukas has his sights set on applying to the Astronaut Corps after completing grad school.

“Even if I don’t become an astronaut, I would love to work for NASA or SpaceX, designing spacesuits or vehicles to support human habitation,” he said. “However, if my destiny is constrained to Earth, then I may pursue tissue engineering in robotics. NASA is working on exoskeletons — think Iron Man — to assist people with disabilities in performing ordinary tasks.”

“Despite being a graduating senior, I am still in the process of choosing a career path,” said Lukas. “Not because I have too few interests, but rather, because I have too many. But whether I become an astronaut, engineer, researcher or entrepreneur, I want to do something that makes a difference and benefits humanity.”