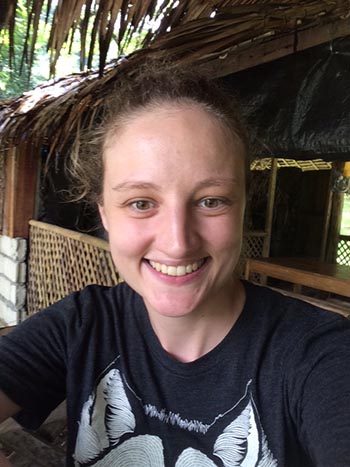 Lucie Baumont, a PhD student in the College of Arts and Sciences Department of Physics and Astronomy is among 49 graduate students recently selected by the U.S. Department of Energy’s Office of Science Graduate Student Research (SCGSR) Program to receive supplementary funding and placement in a DOE laboratory to work alongside DOE scientists.

As part of her PhD work, Lucie uses weak gravitational lensing of galaxy clusters to learn about cosmology. “According to Einstein’s theory of general relativity,” Lucie said, “massive objects, such as a galaxy clusters, actually curve spacetime. This curved spacetime acts as a giant lens, magnifying and distorting light from distant galaxies that passes through it on the way to Earth.” Using a camera called DECam, Lucie takes high quality images and measures the distortions. The information she gathers allows her to reconstruct the galaxy cluster masses in an effort to investigate the evolution of the universe.

Through the SCGSR program, Lucie will travel to the Stanford University operated SLAC National Accelerator Lab in San Mateo County, California, where she will work on a cosmology inference code that will allow her to find which models of cosmology best agree with her data.

“I am thrilled that this award honors Lucie’s hard work on a large and complex PhD project,” said Anja von der Linden, Associate Professor of Astronomy who is Lucie’s advisor. “Upon completion of this work in collaboration with researchers at SLAC, she will be one of only a handful of people capable of taking state-of-the-art weak-lensing datasets all the way from raw pixel-level data to the inference of cosmological parameters. Her project and the acquired skillset places her in an excellent position to take on future leadership roles in the analysis of upcoming cosmology surveys such as the Large Synoptic Survey Telescope.”

The goal of the SCGSR program is to prepare graduate students for science, technology, engineering, or mathematics (STEM) careers critically important to the DOE Office of Science mission, by providing graduate thesis research opportunities at DOE laboratories. The SCGSR program provides supplemental awards to outstanding U.S. graduate students to pursue part of their graduate thesis research at a DOE laboratory/facility in areas that address scientific challenges central to the Office of Science mission. The research opportunity is expected to advance the graduate students’ overall doctoral thesis while providing access to the expertise, resources, and capabilities available at the DOE laboratories/facilities.