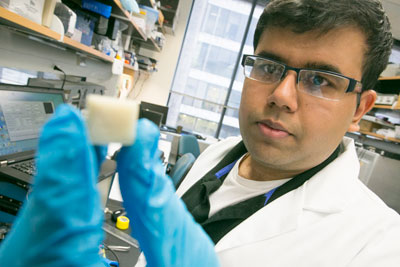 Imagine arriving in a country as a six-year-old with no knowledge of the native tongue or culture. Compound this with the ridicule of other children who label you “slow.”

Stony Brook University biomedical engineering major Kunal Agarwal ’15 remembers learning of these grade-school taunts from his one Indian friend, who spoke both English and Kunal’s native language, Hindi. Kunal could have allowed the epithets to destroy his self-esteem and hinder his progress, but instead, Kunal vowed not only to learn English, but also to excel in it.

“I was very fortunate to have a teacher who not only understood my problem, but also took steps to make sure my transition was as seamless as possible,” Kunal said.

“She seated me next to a student who also spoke Hindi — a complete blessing. He would teach me various expressions and translate words for me that I did not know.”

Kunal also learned a great deal of English and cultural nuance by watching TV, particularly cartoons such as Pokémon. As he got older, Kunal read everything he could get his hands on, including the Harry Potter series.

The turning point for Kunal came in third grade when he finished his first Harry Potter book a week before all his fellow students did. That’s when he knew he’d beaten the language barrier. However, it was science that truly captured Kunal’s imagination.

“After graduating from high school, I knew I wanted to be able to apply the science I had learned to practical situations. I had read about biomedical engineering and figured that was a way to combine medicine and engineering and really make a difference in the world,” he said.

Kunal conducted his undergraduate research at Stony Brook in the Orthopedic Bioengineering Lab of Professor Yi-Xian Qin, who taught him how to solve problems and think creatively. His lab’s focus was on osteoporosis, the degeneration of bone due to various causes, such as inactivity and hormonal changes.

“My first project was studying how bone grows in response to stimulation to liquid pulses,” he said. “My main project was focused on using ultrasound, which is noninvasive and inexpensive, as a diagnostic tool.”

By his sophomore year, the boy who once struggled to learn English was co-authoring a paper titled “Dynamic Fluid Flow Mechanical Stimulation Modulates Bone Marrow Mesenchymal Stem Cells,” as well as presenting his findings before other scientists at the Annual Biomedical Engineering Society Meetings in Seattle, Washington, and San Antonio, Texas.

Being a member of the Honors College also afforded Kunal opportunities to which other students might not be exposed, namely, a course in Public Art taught by Professor Michele Bogart and two courses taught by Stony Brook University President Samuel L. Stanley Jr.

“The art class taught me about the vibrant public art and architecture in New York City,” said Kunal. “The courses with Professor Stanley made him my role model.”

Kunal is bound for Yale University, where he will pursue a masters of science in engineering and applied science, but he looks back Stony Brook as a formative experience.

“I met my best friends at school the very first day of college,” he said. “I remember moving in, introducing myself to my hall mates and instantly having fun. I was fortunate to live with five of my best friends for those years and as a result, have made lifelong friendships.”

From a strictly academic point of view, Kunal is excited about his future as a biomedical engineer.

“Robotic surgeries are becoming more widespread because they allow much more precise and less invasive surgeries, which decrease the potential for human error and save both time and money for patients,” he said.

“Many new and revolutionary technologies are being produced that are changing how medicine is practiced.”

This past spring, 21 individuals and 12 groups were honored with the 2021 Undergraduate Recognition Awards. The theme for the awards was “Honoring Leadership and Service through a Global Pandemic.” Nominated by Stony...