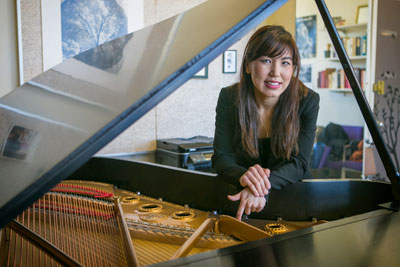 Doctoral music student Rachel Naomi Kudo is no stranger to pressure, in fact, she thrives on it.

In late February, Rachel placed second in the prestigious 2015 National Chopin Competition, which took place in Miami, Florida. By virtue of that finish, she netted $35,000; qualified for the International Chopin Competition (for which she received an all-expense-paid trip to Warsaw, Poland, where the competition will take place in October;) and won the Special Prize for the Best Polonaise, which was worth $1,000.

“I’m not surprised to learn that Rachel placed so highly at such a distinguished competition,” said Perry Goldstein, professor and chair of the Department of Music. The piano students at Stony Brook, drawn by our superb faculty, are excellent. We have more than 100 prospective graduate students in piano audition annually and only a handful are accepted. This means the level of pianists in the department is as high as at any institution in the country.”

At Stony Brook, Rachel studies with Gilbert Kalish, a pianist and Distinguished Professor of Music. It was Kalish who foresaw greatness in Rachel, nominating her for a prestigious national honor — the Gilmore Young Artist Award, which she won in 2008. Which is a good thing, because Rachel chose to attend Stony Brook to study with Kalish. “He has an incredible reputation. His ear, intuition, warmth, generosity and depth are all very apparent in his music and his being.”

“Rachel Naomi Kudo is one of those young musicians with both tremendous technical fluency and the ability to communicate her passion for the music,” Kalish said.

At the national Chopin Competition, Rachel was in distinguished company, placing just behind a wunderkind who studies with faculty at the Curtis Institute of Music and just ahead of a pianist who studies at the New England Conservatory of Music.

The accolades keep rolling in. Rachel was just named a winner of the annual Stony Brook concerto competition and earned herself a berth as a soloist with the Stony Brook Symphony orchestra during the 2015-16 concert season.

Rachel’s piano-playing story began at the age of four. Although she doesn’t recall the compositions she tackled at that tender age, she said it wasn’t long before she was on a Chopin spree. The Northbrook, Illinois, resident said that her grandmother, Yasu Kudo, an avid classical music fan and concertgoer, “chose the piano for me.”

Her teachers, beginning with Emilio del Rosario at the Music Institute of Chicago, who took her from four to 18 years of age, helped mold her personally and musically. At the Vancouver Academy of Music in 2001, Kum-Sing Lee worked with Rachel, who went on to earn both a bachelor’s degree in music in 2009 and a master’s degree in piano performance in 2011 from The Julliard School, studying with Yoheved Kaplinsky from 2005 to 2011 and Joseph Kalichstein from 2009 to 2011.

Her list of orchestral and recital and chamber music performances is impressive, zigzagging all over the United States, Europe and Asia.

How does Rachel keep her composure in a field that allows no margin of error?

“Performing is always a combination of battling unpredictable elements: your mood and physical condition, the condition of the piano, your nerves and adrenalin, and the audience,” she said. “Concentration is key in any performance.”

One strategy that Rachel employs is to channel the composer, paying homage to the composition’s greatness.

“In pop or rock the singer or band may be the center of attention, but as a classical musician, I am simply the vein or the outlet of creativity,” she said. “Many of these works by the great composers are life-changing, gut-wrenching, heartbreaking masterpieces that comment on the beauty, tragedy, joy and sorrow of life,” she added.

Rachel said she doesn’t get lost in the music but rather feels a kind of hyper-awareness that emboldens her. “I become more sensitive, observant, almost in a Zen state of mind,” she said.

“Performing is one of the most freeing feelings I’ve ever experienced,” “It’s a privilege. I’m lucky to be in love with what I do. I don’t ever want to stop.”

Whether it’s as a soloist or collaborating with an orchestra or chamber ensemble, Rachel is at home when she is in front of an audience.

“No two performances or competitions are alike,” she said. “Music is my life and I’m happy to say there is no plan B.”