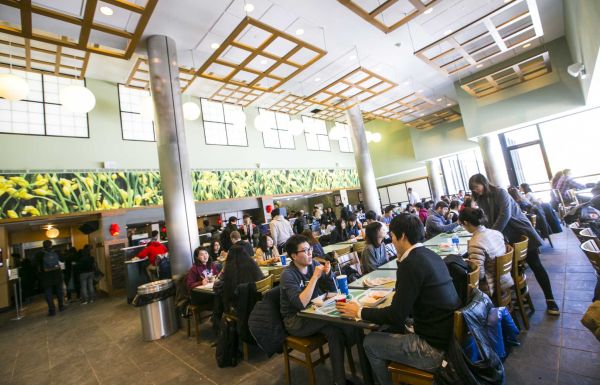 Through an array of resources and a wealth of sympathetic human beings, Stony Brook University rolls out the welcome mat for international students.

For most students, orientation serves as the bridge to their newfound academic milieu. And who better to mentor new international students than their established predecessors?

“We are taught all of the available resources on campus to help them with any questions they might have,” she says. “The fact that I could empathize with all of the incoming international students is what motivated me to help out.”

“The orientation leaders and the International Student Ambassadors were the first people I met that had a huge impact on me,” says Vanessa. “I’m best friends with my ISA now and she was the first person who made me feel at home and welcome here.”

“Having had a positive experience during my orientation week and eager to involve myself on campus, I wanted to help international first-year and transfer students to adjust to, utilize and enjoy their time at Stony Brook,” he says.

“Working as a family, we guided the incoming students to their residence halls, conducted presentations, assisted them with their immigration intake, took them on shopping trips, answered all of their questions and gave them a tour of the campus,” says Javin.

Navigating the American education system, which includes understanding graduation requirements and learning how to enroll in classes, is daunting enough for domestic students. Factor in the added challenge of having to steer around these obstacles and conducting transactions in a second language, and it’s not hard to understand why help is needed.

Japan native Karen Matsumoto ‘17 thought that her mastery of the English language would help her segue seamlessly into American life when she arrived at Stony Brook. However, “cultural adjustments are harder for me than language adjustments,” she says. “I was confident in my English-speaking capabilities but when I got here I found that people were speaking too fast for me.”

International students are often high performers. For example, Brazilian national  Helena Ge ‘19 is fluent in three languages and familiar with three others, including English. Still, she was more worried about not making a smooth transition into the American mainstream and easily adopting its values and behaviors. Helena was pleasantly surprised to discover that most of the American people she met thought she was a longtime U.S. resident.

“I still forget words sometimes though,” she says.

Difficulty with language is precisely the reason that the International Student Organization (ISO) and Golden Key International Honour Society initiated the 10- to 12-week English program known as English Pal, begun in 2011, in which an English-speaking tutor and international student meet a minimum for 30 minutes per week to practice conversation in a casual setting.

Johnson Liang ’17, who is originally from Dominican Republic and speaks fluent English, made it his community service project to pair with a non-native student who wanted to improve his conversational English skills.

Then there are the cultural differences. Vanessa grew up in Dubai, where social freedoms that Americans take for granted are restricted. When some of her friends went to fraternity parties on weekends, which is something that didn’t appeal to Vanessa, she experienced loneliness and homsesickness.

On-campus advisors were on hand to help. They might do everything from helping a student devise his or her first-semester schedule to recommending student resources, such as counseling and psychological services, the writing center and tutoring centers.

iCafé serves as a platform for students to forge new connections and integrate into the Seawolves culture. One of the topics frequently covered at iCafé workshops is self-assertion, a common theme also underscored by the ISA and International Student Organization.

Helena says she was afraid of going to the airport to welcome incoming international students, but her ISA fellow students gave her confidence and coached her to overcome cultural barriers and help new students.

Karen took her time learning about all of the resources available to her and joined the Japanese Student Organization. There she met other students who understood her cultural roots. She soon realized she could become a TA for a Japanese language class.

Sometimes students find that the best ways to address homesickness for the culture they left behind is to immerse themselves in Stony Brook’s microcultures, which represent many ethnicities. Helena’s perfect match was the Taiko Tides, which celebrates traditional Japanese drumming. She relied upon her strong organizational skills as the manager of a clothing store in Brazil to become the club’s secretary in Spring 2016. That fall, she became the club’s president, a position she still holds.

Another way to ease longing for the homeland is to take advantage of both America’s and Stony Brook’s diversity. “Random craving for homemade food hits me hard at times, says Johnson. “I was able to compensate for this by eating at authentic ethnic restaurants in the city. On campus, there are international dining facilities that feature well-prepared food from your culture.”

Sometimes, a student finds the perfect mentor on campus and everything just falls into place.

“In our supervisor, Trista Lu, coordinator for International Student Orientation and Services, I found an ideal mentor,” says Javin.