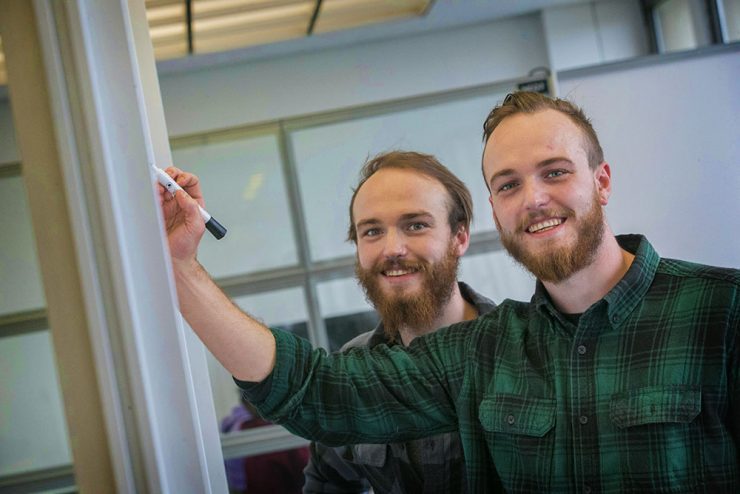 Christopher and Andrew Wheaton of Sayville aren’t the first twin Seawolves, but as they march into Island Federal Arena on Friday, Dec. 21 for their Winter Commencement, they’ll mark an interesting milestone: they’ll receive identical degrees after sharing every class of their academic career.

The 23-year-old identical twins will earn MBA degrees with a concentration in marketing from the College of Business, the capstone of their academic careers which also include bachelor’s degrees in business from Stony Brook.

“Our parents always encouraged us individually, and didn’t force us into doing the same things. But we just naturally developed the same interests and hobbies,” said Andrew, the younger twin by 40 minutes. “If one of us got into something, the other would eventually pick it up and love it, too.”

Growing up, the Wheaton brothers enjoyed football, competitive swimming and movies. In school they excelled in math, and as college approached, they found a mutual interest in finance.

“I was always a numbers guy, and toward the end of high school our parents suggested trying actuary science,” Christopher said. “I didn’t know anything about it, but it seemed pretty cool. Eventually that led into accounting.”

In 2015, they received associate’s degrees in accounting from nearby Suffolk County Community College, and then set their sights on a long-held goal of studying business at Stony Brook.

“I always knew I wanted to work for myself, and a business degree can be used in so many different areas. It was a good fit for both of us,” Andrew said.

A few days before graduation, the twins reflected on the experience of sharing every class, every teacher, and every deadline.

“It was great having my brother to study with. We had each other for bouncing ideas around and getting feedback,” Christopher said.

Bob Ettl, a lecturer for the College of Business, had the Wheatons in class both as undergrads and grad students. He noted that they were excellent students, and usually within a few points of each other on exams.

“It was clear to me that they studied together, and I support that — after all, we can all benefit from collaboration and supporting each other,” Ettl said. “But even now, I still can’t tell them apart. At their [undergraduate] graduation, I just announced them as ‘the Wheaton brothers.’ We all had fun with that.”

While having each other there most of the time was often a comfort, the brothers acknowledged that like any other siblings, it wasn’t always easy spending so much time together.

“Most of the time it’s great, but there are some days that being together all day and then going home together at night is just rough,” Andrew said, and they both laughed. “We really respect each other’s need for personal space and doing things separately, especially after school.”

After graduation, they’ll likely go their separate ways — Andrew has plans to turn a school bus into a mobile greenhouse for teaching others about environmental sustainability. Christopher is looking forward to traveling before starting the job hunt.

While the odds of working at the same place are slim, they said, they have one more aspiration in common.