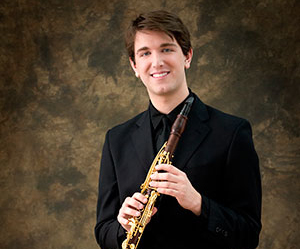 Come for the clarinet; stay for the opera.

Music major David Davani ’16 landed a full scholarship to Stony Brook based on his proficiency as a clarinetist. But the discovery of his powerful baritone voice now has him singing, and studying, Puccini.

Before Stony Brook, David was was trained at the Mannes College of Music, part of the New School in New York City.

An avid Mozart fan, David knew that performance was in his blood when he won a concerto competition playing the Mozart Clarinet Concerto before a packed hall of cheering fans while still at Mannes. He was rewarded with a standing ovation and then slipped back into the orchestra and played the complex principal clarinet part for Igor Stravinsky’s “Firebird Suite.”

“Mannes gave me an understanding of music well beyond the undergraduate level before I finished high school,” he said.

Although clarinet was always his primary instrument, David was constantly singing as he grew up and opera was his favorite musical genre. Singers such as Robert Merrill, Sir Thomas Allen and Placido Domingo stoked his musical fires, as did the conductor Riccardo Muti.

“Opera is just something that I live and breathe,” said David. “Art songs are also in my repertory; so many of them are so beautiful.”

During his freshman year at Stony Brook David’s voice coach, Christopher Reames, a Stony Brook alumnus, had recommended him for a few small roles in Stony Brook Opera’s Fall 2013 concert. When concert director David Lawton and Timothy Long, who is his current coach, heard him sing, they were wowed.

“I had a bit of a discussion with myself at this point and decided to change career paths when I saw that I actually might have a chance to become a professional singer,” said David.

Lawton then gave him a major role, Schaunard, in the Stony Brook Opera production of Giacomo Puccini’s La Boheme, to be performed at the Staller Center on April 30 and May 1.

Although research was the magnet that drew David to Stony Brook, he soon found something else to love about his choice.

“At a school like this, I get to craft my own education,” he said. “I even got to take a political science class in which Carl Bernstein gave half of the lectures. And the class was small.”

The scholarship and being accepted into the Honors College made enrolling at Stony Brook a “no-brainer,” David said.

David likens the ability to produce the amount of sound needed for singing opera to wearing a suit made out of lead — as physically taxing as being an athlete. And that’s why his physical training includes free weights, bench press, crunches and leg lifts.

On the day of a performance, David avoids conversation in favor of deep breathing and getting to a “zone” where he can simply focus on the music in his head and the task at hand.

David considers the most stressful performance one in which he is performing for his colleagues. “It is very hard to do your best when your competitors are watching you like that,” he said. “It’s easier performing for a group of people who are rooting for you rather than judging you.”

And yet, this musical perfectionist is only happy when he is evolving and improving.

“There is nothing drearier than being stagnant and not challenging yourself to be always better. That is why I am my biggest competition.”

An expert in battery research, her innovative work inventing lithium/silver vanadium oxide (Li/SVO) has been instrumental in saving innumerable lives.