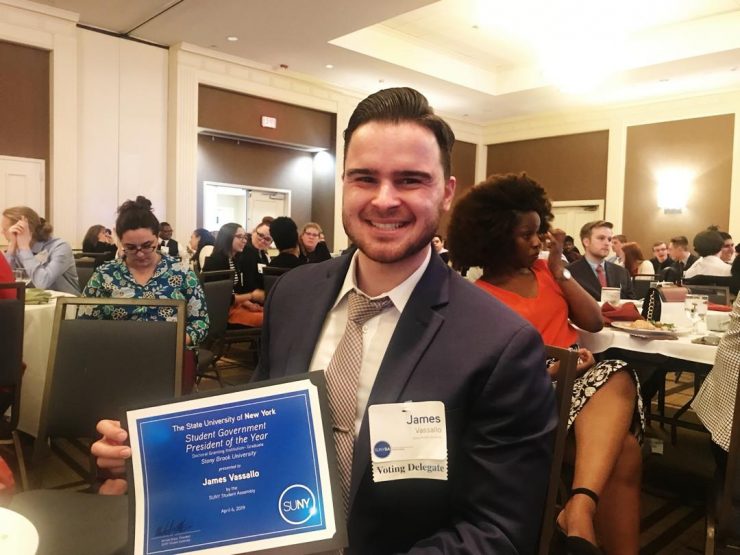 “We’ve done a lot of work this year at Stony Brook Graduate Student Organization to try and make big improvements and big changes and lay a lot of groundwork for the next few years,” Vassallo said. “I think it shows positive momentum on our behalf.”

Vassallo graduated from Stony Brook in 2017, and is currently enrolled in the master’s program in public health. He works with the Alda Center as a graduate assistant, helping with online curriculum development and event planning.

In his undergraduate career, Vassallo was actively involved on campus. He was an Orientation Team Leader and President of the Commuter Student Association. He also served as Vice President of Project Sunshine and Executive Chair of the President’s Council of Student Advisors.

As president, he has made changes to increase graduate student representation in student government, expanded event programming to reach 300 to 400 students, constructed a new website for the organization, joined programs such as the Menstrual Hygiene Program on campus initiated by the Undergraduate Student Government and Student Health and Wellness, and traveled to Washington, DC to advocate for increased funding for graduate student research and financial aid.

“It’s important to me because when I came into this role, one of my goals was to really take it further,” Vassallo said. “To me, winning this award shows that we’ve done that. We’ve been able to raise the bar of what it means to be a graduate student leader at Stony Brook.”

In the future, Vassallo hopes to expand mental health awareness. This past semester he conducted an assessment project on mental health to understand the perspectives of graduate students and to get recommendations from the student body.

“Every student wants to see a change in the university and in their campus, and if you want to see that change happen, getting involved in student government can help you make sure that you see it through,” Vassallo said.

Vassallo would like to thank Dean of Students Richard Gatteau, Dean of the Graduate School Dr. Richard Gerrig, Senior Vice President for Government and Community Relations Judith Greiman, and Director of Government Relations Lauren Brookmeyer for their support for GSO initiatives.