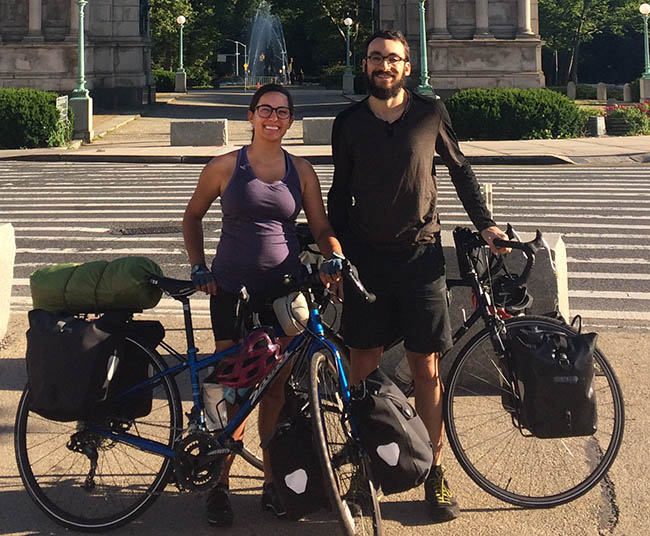 Two doctoral students at Stony Brook have embarked on a research mission to bike hundreds of miles to an academic conference in the Midwestern United States.

As a way to outflank the carbon footprint of air travel and give meaning to their journey, doctoral students J. Caity Swanson and David Rodriguez are bicycling their way to Detroit, Mich. to attend the 12th biennial conference for the Association for the Study of Literature and Environment (ASLE) later this month. Each expects to discover something about what type of impact travel has on perspective. The conference is the major international conference for interdisciplinary work in the humanities and environmental studies.

“My interests are how narrative and navigation are related, so this will be an opportunity to think about that,” Rodriguez said.

The pair of academics will be taking part in a panel discussion called, “Travel Experience and Conference Form,” which will take place at Wayne State University on the morning of June 23. Before that, the Stony Brook English students will log 670 miles by bike (roughly 60 miles a day).

For Rodriguez, the inspiration to bike to the event stemmed from complications he experienced with arrangements traveling to the 2015 conference Moscow, Idaho. In 2016 he participated in UCSB’s “Nearly Carbon Neutral” conference, which took place entirely online.

Swanson said she views the unconventional travel mode as research into how slowing down travel and making it effortful can change the experience of attending a conference.

“I’m not suggesting that everyone start biking to conferences but I would like us to look more closely at the unseen and ignored costs of conference attendance, of which CO2 is only one,” she said. “I’m interested in how form shapes and determines content in literature and this project is an attempt to use that lens to think critically about my own work and profession.”

They are camping at various locations all but two nights of their 12-day journey, which began June 9 from Brooklyn, where they live. Rodriguez will also be staying at friends’ homes that intersect with their itinerary.

Although the two plan to write about their experiences when they return, they will be tweeting and posting pictures sparingly @SeaSwanSun and sharing information with the English Department @EGLStonyBrook for use on its Twitter account.

“Partly, this an intentional effort to avoid falling into the common tropes of travel writing and long-distance bike tour writing and partly we want to be able to just focus on writing for the conference and about the experience of the trip,” Swanson said.

Planning what gear to bring can become an obsession, both students said. Rodriguez said his saddlebag, mounted behind the seat, will contain an insulation sheet and solar panel, a hammock, tarp, and three changes of clothing. He will also bring an iPad and natural insect repellent made by his partner. Both students said that the biggest challenge was adhering to a “zero waste” policy that involved bringing food without packaging and that they won’t be able to fully comply with that policy.

“I don’t see this as an environmental act but I will probably choose to bikepack instead of drive on my next vacation,” Rodriguez said. “This is some kind of a lifestyle change.”

The classmates plan to treat the return trip in a more leisurely way, with a stop at Niagara Falls, perhaps.

“The department is very proud of David and Caity for their ambitious project,” said Celia Marshik, Department of English professor and chair. They are demonstrating that the field of environmental humanities not only asks new questions but suggests new ways of conducting our academic business. Instead of increasing their carbon footprint by flying to Detroit for the conference, their bicycle trip draws attention to the environmental costs of conference, and more broadly, business travel. We wish them well and look forward to seeing their updates from on the road!”

You can learn more about their trip, in their own words, by visiting “Wicked Problem: a podcast about climate change,” a creation of the Department of Environmental Humanities.