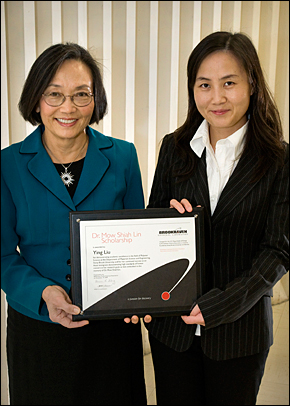 Ying Liu, a graduate student in the Department of Materials Science and Engineering, has won the fifth annual Mow Shiah Lin Scholarship. The Asian Pacific American Association (APAA) at the U.S. Department of Energy’s Brookhaven National Laboratory (BNL) sponsors the scholarship, which consists of $1,000 and a plaque to honor the distinguished late Brookhaven Lab scientist for which it is named.

Lin began his career at BNL in 1975 as a postdoctoral fellow and advanced to co-lead a research team working with an environmental remediation company to use selected bacteria to convert toxic oil wastes, such as used motor oils, into useful products. In 2001 Lin shared an R&D 100 Award, given by R&D Magazine to the top 100 technological achievements of the year, for developing a technology to recover silica from geothermal brine. Lin died suddenly due to a brain aneurysm in 2003, and his coworkers, friends, and family contributed funds to establish the scholarship.

In remembrance of the manner in which Lin began his career, the scholarship is granted annually to an Asian immigrant with a student visa who is matriculating toward a graduate degree at an accredited institution of higher education in environmental science, biology, or chemistry in honor of Lin’s research and inventions.

“I am very grateful to receive this scholarship,” said Liu. “I am fortunate that the APAA encourages students to continue their research.”

Liu came from China to the U.S. to pursue advanced degrees at Stony Brook. She expects to graduate with a Ph.D. in materials science in August 2010. Liu studies polymer science with a focus on the interaction between human cells and biocompatible fibers and the encapsulation of microorganisms in polymers. Her research may have applications in numerous areas, including wound repair, drug-delivery systems, and wastewater treatment. After graduation Liu hopes to continue her research on polymers, either as a postdoctoral student or in industry.