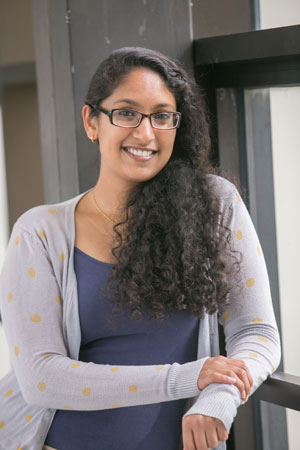 When Gouri Sadananda ’16 was considering which university she should attend, she chose Stony Brook over a completely cost-free education from another institution. Why?

In a word, research.

“I knew that at Stony Brook I would get a more relevant, more intense and more meaningful research experience – and scientific research was what I wanted to pursue,” Gouri said.

When Gouri arrived on campus, she was already part of an elite small community, the Honors College.

With its special curriculum aimed at developing critical thinking, emphasis on working closely with distinguished faculty and access to research opportunities, Honors College provided the perfect fit for science-minded Gouri.

“I attribute a large portion of my comfort at Stony Brook to that,” she said. “The Honors College gave me a diverse community of open-minded people who I am grateful to say, have been with me for the past three years.”

As a freshman, Gouri joined a lab that drew heavy conceptual material from the field of bioelectricity, an area that was new to her. Her lab work ventured into the emerging field of optogenetics, the study of how light can be used to manipulate the body’s responses.

“In the case of humans, the ultimate goal is to be able to alter the heartbeat of cells that we have modified,” she said. “One of the possible applications of this would be to create a pacemaker that uses light rather than electrical stimulation. The work that we do is laying the foundation in a burgeoning field that may in the future lead to something life-changing.”

In the summer of 2014, Gouri received funding to continue her research in optogenetics when she participated in Explorations in STEM (Science, Technology, Engineering and Math), a ten-week program that supports Stony Brook students doing full-time faculty-mentored research in those fields. Gouri said one of the major assets of this program is its emphasis on communicating science, which proved useful when she presented her research at the Biomedical Engineering Society Annual Meeting in San Antonio, Texas, in the fall of 2014.

“Being able to communicate science is a distinct ability in itself — one that goes far beyond confidence and flow of speech,” she said. “Describing scientific research requires you to know your field inside and out and to be able to explain it in dozens of different ways to any audience.”

An experience that Gouri found instrumental in building her self-confidence and communicative skills was her work as a community outreach coordinator at Camp Kesem Stony Brook, a free, non-profit, student-run summer free camp for children affected by a parent’s cancer. This summer, Gouri served as the Camp’s co-director.

Simultaneously, Gouri began learning how to present herself in a professional setting through the help of the Women’s Leadership Council, a group of undergraduate women from a diverse range of backgrounds and disciplines who are selected to receive mentorship from prominent female leaders in various fields.

“This program has been invaluable in helping me build my future,” said Gouri. “From providing tips such as advice on professional dinner etiquette to opening the doors to summer internships, the Women’s Leadership Council has contributed significantly to my personal growth.”

In addition to her progression as a scientist, Gouri has participated in the arts at Stony Brook.

While playing flute in the Stony Brook University Orchestra as a freshman, she heard about the University hand bell choir known as The Stony Brook Ringers. Gouri recently began training as the group’s conductor.

In her sophomore year, she also helped lead Toscanini College in designing a boat to compete in the Roth Regatta, which received an award and high praise.

No wonder: After three years at Stony Brook, leading the way comes naturally to Gouri Sadananda.