Global Innovation Team Improves Community Through Engineering on Campus and Beyond 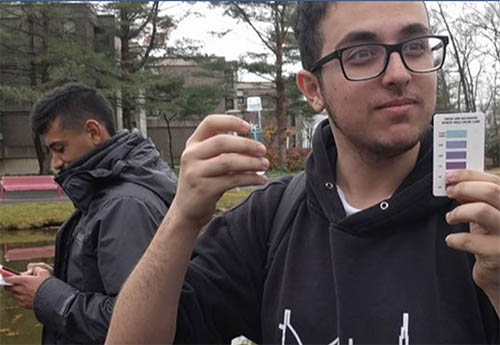 The Roth Pond Regatta is a Stony Brook tradition, and while some student groups are preparing to compete in the annual cardboard boat race on campus, the Global Innovation Team (GIT) is working hard to reduce the pond’s ongoing algae problem.

Founded in 2015, GIT is a student organization that leads community improvement projects on campus and in the local area using student ideas and knowledge.

One of the club’s many projects is beautifying Roth Pond after excess blooms of algae were found there in 2015. The club submitted a two-part plan to Campus Residences to accomplish this. The first part, which was approved, involves creating a buffer around the pond to prevent run-off. The second part of the plan involves creating a floating island in the pond with plant roots that would soak up bad nutrients in the water.

GIT will begin implementing its Roth Pond plan after testing algae levels at the end of the fall 2016 semester.

The club was formed after the Stony Brook chapter of Engineers Without Borders disbanded. While GIT mainly attracts engineering students, all students are welcome to take part and pitch ideas to help improve the campus community.

“I wanted to get involved with project management as well as make an impact on the university, and GIT seemed like the perfect avenue to do that,” Abajahni Sealey ‘18, a project manager for GIT, said.

Besides working on those areas on campus, the club is also building a bike generator for the Office of Sustainability to show at Earthstock, Stony Brook’s celebration of Earth Day, as a way to highlight a form of sustainable energy and reducing plastic use on campus.

“When I was in high school, I heard the words engineer and scientist, and they didn’t mean much to me,” said Kocaj. “But after joining GIT and seeing all the really cool things going on in our members’ lives, like their lab research and engineering projects, the goal of being an engineer became tangible for me,” Kocaj said.

With their budget approved for the spring semester, GIT can officially start working on new projects, and encourages students of all majors to get involved.