From the Forests to the Brook 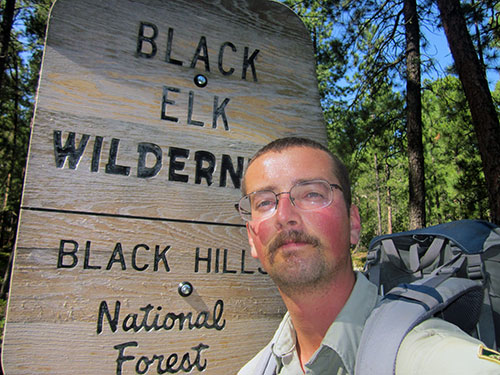 Peter Stampfel’s decision to turn in his forest ranger badge in pursuit of a new career is a reminder that some of the best life lessons come from outside the classroom.

The 28-year-old Greenville, New York, native graduated from Orange County Community College in 2009 with an associate degree in science.

Inspired by books such as Walden by Henry David Thoreau and On the Road by Jack Kerouac, Stampfel began hiking the Appalachian Trail before spending more than a year traversing the United States in his Honda Accord. Along the way, he found jobs through the World Wide Opportunities on Organic Farms, a group that links volunteers with organic farms and growers, and the Student Conservation Association.

A 2010 gig as a wilderness intern for the U.S. Forest Service led to a paid seasonal position as a ranger the following year. That kept Peter busy on a seasonal basis until he enrolled at Stony Brook as a biology major with a concentration in neuroscience.

Peter said he experienced many scary moments while on duty in the Klamath and Black Hills National Forests, such as waking up to the sight of a black bear only feet away from him, and watching his partner nearly get bitten by a rattlesnake they spooked. Not to mention a close call felling a tree in a backcountry campsite.

Balancing out the danger were exhilarating moments, like climbing 14,000-foot glaciated mountain peaks and gazing upon nature’s breathtaking beauty. There was also the satisfaction that came from performing good deeds, he said, including helping lost hikers, clearing trails and removing trash from pristine wilderness areas.

Working as a ranger only stoked Peter’s sense of adventure; however, and it was one particular sojourn in 2013 that led him out of the forest and back into the classroom. The trip came at the end of a period in his life when he had “hitchhiked” on sailboats from Central America to French Polynesia, worked on ranches in the Australian Outback and wound up in India.

Peter had heard that there was a village in the Himalayas — McLeod Ganj, an area dealing with extreme poverty and illness that was devastated by a damaging monsoon season — that had a crying need for volunteerism.

After working at a daycare center for Tibetan children and teaching them English for six weeks, Peter decided to go to Nepal when monsoon season ended. He had glimpsed photographs of the famed Annapurna Circuit — a 128-mile horseshoe-shaped route that traverses dense jungle, canyons, lush forests and mountains — on the walls of the rental unit at which he stayed.

“Mountaineers all over the world know about this trek and it was just up the road, so to speak,” said Peter. “I went there for pure adventure and fun. There was zero percent philanthropy in that decision.”

While he was on that journey, Peter had an epiphany — medicine, not environmentalism, would provide the best opportunity for him to help his fellow human beings.

“I chose Stony Brook because it has a hospital on campus, a good reputation for what I want to do and is near to my family,” said Peter, who has his sights set on becoming a physician assistant in underserved rural areas.

To stay in touch with his vision, Peter serves as an emergency medical technician with the Port Jefferson Emergency Medical Service. He looks forward to working at one of the region’s hospitals so he can accumulate the 1,000 hours of direct patient care required for admission into a physician assistant program.

“Being a non-traditional student gives me the advantage of having a very clear picture of what I am doing and a reason for doing it — not something that someone else imposed on me, but rather something that I found on my own. And I think that is really cool.”