For Young Engineer Prabowo Setiawan ‘18, the Sky’s No Limit 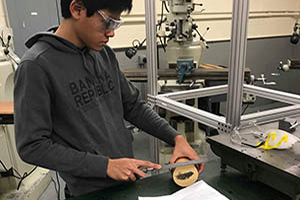 Could the toys we loved as children predict our future careers? Just ask Prabowo Setiawan ‘18, a mechanical engineering major and University Scholar.

Setiawan began playing with Lego Bionicles when he was five. Today he is building rockets as a member of the Stony Brook Chapter of the American Institute of Aeronautics and Astronautics (AIAA). This past month the AIAA participated in the NASA student launch competition, which entails building a high-power model rocket launch vehicle.

“I was able to put the Bionicles together even an early age,” he said. “My interest in building things has just increased as I grew older.”

As a boy, Setiawan fantasized about  flying to many of the nearly 17,000 islands that make up the Indonesian archipelago, where he lived for the first 15 years of his life. That fueled his desire to get an education that might help him improve air transportation from island to island.

The Indonesian education system, with its emphasis on math and science, trained Setiawan to think logically and helped him realize that if he immersed himself in these subjects he could someday aid in the invention of new technologies. Setiawan joined his school’s team to prepare for the Indonesian Olympiad for physics and chemistry with the chance to compete nationally. As a teenager, he left his homeland and moved to the United States when his father took a job as an economist for the New York branch of Bank Indonesia.

“At first, I only planned to spend time in the United States as long as my father was here,” Setiawan says, “but when I was I was given the chance to stay and go to a university here instead of leaving Queens with my family, I took that opportunity.”

“I believe that by reducing the weight of airplanes using two distinct materials that act together to provide novel qualities both chemically and mechanically, fuel efficiency can be increased,” he says. “If airplane companies do not worry about fuel as much, they can concentrate on developing and improving other features of the airplanes, one of which is travel time.” Setiawan admits to an ulterior motive: He makes the 23-hour flight back to Indonesia annually.

But Setiawan’s dreams extend even beyond earth’s gravitational pull — to space — where he thinks humankind needs to start looking to exploring for minerals and other natural resources that we are rapidly depleting.

“Eventually the human race may need a new place to live other than Earth, either because we run out of resources or become overpopulated and run out of room,” he said.

For now, Setiawan is content serving as the vehicle structure team captain in the NASA Student Launch Competition that took place in early April in Huntsville, Alabama.

But in order to compete, he and his fellow engineers were put to the test. The process began in January, when his team launched Big Bertha — assisted by mentors from LIARS (Long Island Advanced Rocketry Society). Setiawan said that the rocket, which is two feet long and weighed only about one pound, ascended approximately 224 feet. The launches that followed were roughly 1500-feet high for the sub-scale and a mile high for the full-scale model.

The vehicle must achieve certain goals provided by NASA, such as delivering a payload in the form of a rover carrying a solar panel. To organize the design process, his team divided itself into four subsystem teams: propulsion, structure, recovery and payload. Launches must be properly executed in approved locations by rocketry clubs that have the permission to do so.

“Only individuals with high-power rocketry qualifications and who possess National Association of Rocketry high power certification are allowed to handle these motors,” he said. “We are confident that these launches will not present any danger to the public mainly due to a safety officer’s thorough review prior to every launch. If we get the green light we can proceed. If not, we have to go back and make the necessary changes.”

For the Huntsville competition, Setiawan and his team built a BOWOW Heavy rocket that failed the test launch in early March, said Setiawan. “The bottom of our rocket completely sheared off, which led to our rocket breaking apart during ascent,” he said.

Flight of the BOWOW

But they were determined to press on. Despite having only three weeks to rebuild an entirely new rocket in order to meet NASA’s requirement for the competition, Setiawan’s team came up with a logistic plan to fabricate another one. What could go wrong, did go wrong, however.

“The design of the rocket had to be changed due to the unavailability of the former material of the airframe,” said Setiawan. “We had to order a fiberglass airframe instead, which in turn changed the dimension of our launch vehicle. The motor supplier also had an accident within their warehouse, which forced our team to choose another motor for the upcoming flight test.”

To qualify, the team delivered an impressive result as the BOWOW Heavy 3.0 launched successfully and passed the flight test, clearing the vehicle to compete in Huntsville. NASA is in the process of evaluating the results of the competition.

“Since we are a rookie team, we are hoping to be named Rookie of the Year,” said Setiawan. “This will depend on the overall points accumulated throughout the competition.”

This seasoned “rookie” engineer meanwhile is busily applying to graduate programs and maintaining an open mind about his prospects.

“Once I have enough experience, I would love to start my own company and help innovate the aerospace industry.”