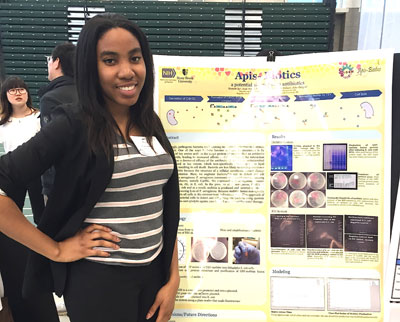 Engaging with communities all over the world comes naturally to Maryam Ige ’16.

While she was attending a boarding school in Nigeria, Maryam learned the value of community service.  During the six years she spent there, which included middle school and high school, Maryam was secretary for a community service club and participated in numerous fundraisers, learning to cut costs and maximize profits by working alongside volunteers.

Born and raised in Queens, New York, Maryam is grateful that her family is active in the Offa Descendants Union of North America (ODUNA), dedicated to helping Nigerian immigrants assimilate into American culture. ODUNA’s mission cuts both ways: Maryam became immersed in Nigerian culture by participating in ODUNA-sponsored events.

She is committed to playing a role in all the communities to which she belongs, whether it’s by caring for veterans, raising awareness or money for a cause, or encouraging young people to succeed.

The biomedical engineering major, who was accepted into the University Scholars program in her sophomore year, has compiled an impressive list of volunteer experiences spanning her time thus far at Stony Brook University.

In 2013, Maryam volunteered at Stony Brook Child Care Services, took part in the Take Steps for Crohn’s and Colitis Walk and the Walk for Weight Loss, and began her membership as a planner and organizer of the Stony Brook Chapter of Oxfam America, whose goal is to take on the challenge of world hunger and poverty.

She also gladly gave her time to transport and visit with veterans at the Long Island State Veterans Home.

As a member of the National Society of Collegiate Scholars, Maryam participated in Planning to Achieve Excellence, an initiative that encourages middle school students to begin mapping out their futures, by hosting events that develop skills and introduce them to campus life.

2014 was a pivotal year for Maryam in terms of communicating her research findings, notably through Undergraduate Research and Creative Activities, the SBU International Genetically Engineered Machine Foundation team presentations and the STEM research symposium.

In the summer of 2015, Maryam was awarded a Medical Scientist Training Program internship at the University of California, San Diego. The program prepares students for dual careers in medicine and research.

This fall, she was elected president of Stony Brook’s Pre-Med Society.

“Excellent mentors have greatly influenced me in my education and career trajectory,” said Maryam. “By incorporating a mentorship program into the Pre-Med Society, I feel as if I am able to return the favor.”

When it comes to her research, Maryam said that she says that she is intrigued that human cells can perform functions for which they were not intended.

“For instance, in the case of Type 1 diabetes, patients are not able to produce insulin, which stimulates the cells in their bodies to take in glucose from the bloodstream to use as energy,” said Maryam.

She explained that introducing a genetic code into the cells that would allow for insulin production when low sugar levels are detected would make it easier to manage Type 1 diabetes and provide new therapies for the disease.

“Whether I’m doing research or volunteering, at the end of the day I feel as if I am positively making a difference in the lives of others.”