For Grad Student Lynn Arthur ’16, Activism’s in the Bag 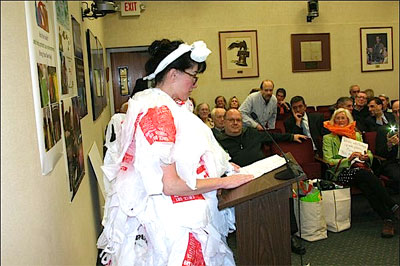 Stony Brook graduate student Lynn Arthur ’16 and the Southampton Town Sustainability Committee recently launched a successful campaign to ban single-use plastic bags that is gaining momentum across Long Island. But the former engineer and consultant for IBM said it would not have been possible without the tools and strategies she learned from faculty at the College of Business.

Last summer, Lynn was faced with a dilemma: As a homeowner in Southampton, she noticed that her town was in a quandary over a legislative ban of single-use plastic bags. She wanted to bring her years of experience selling her ideas to a target audience to convince the town board of its urgency, but being immersed in graduate school left her little time for taking on such a mammoth campaign singlehandedly.

As a community activist, Lynn was already a member of Southampton Town’s Sustainability Committee, assigned to the communications and media subcommittee.

“I knew I could help the committee but since school was my highest priority, the only way I could do both would be if I could incorporate volunteer work into a course project,” she said.

So Lynn asked MBA 505 Marketing Professor Robert Ettl if she could choose to tackle a societal issue rather than a commercial marketing plan. Ettl’s only stipulation was that she partner with another student and they use the marketing principles discussed in class to support her project.

Lynn found her perfect partner in classmate Rachel Cipriano, ’15 who was coincidentally studying public health and taking a course that dealt with the effects of plastics on the human body when ingested.

Lynn also drew from Professor Lily Cushenbery’s “Leadership, Teams and Communication” course to surmount the hurdles she faced in Southampton and the five neighboring towns, where the issue was not yet viewed as a priority.

Lynn decided to dig much deeper in researching the topic.

“At this time last summer, no one was talking about plastic making its way into the human food supply. No one,” she said. “So here I am, a graduate student, thinking I was taking a risk by pointing out the obvious. I told committee co-chair Dieter Von Lehsten and his reaction was, ‘Oh my God, there’s plastic in my food supply?’ ”

By using Stony Brook Library’s website, Lynn found studies authored by scientists overseas demonstrating that single-use plastic bags were being blown into the ocean, where currents aggregated them into large islands of plastic called gyres, the largest of which is twice the size of Texas. The sun decomposes the plastics into microplastics, which land on the ocean floor and make their way through the marine food chain, which is eventually sold for human consumption.

And then Lynn brought out the heavy artillery — a dress that she assembled and wore during a televised town board meeting made out of 330 single-use plastic bags collected from everyone she knew. By using a stapler and pajamas as a frame, she and Von Lehsten constructed the dress in three hours.

“When I made my presentation, the public applauded and since I was nearly the last speaker, the board closed the meeting by voting to cancel the second public hearing because our performance gave them enough information to make a decision,” said Lynn. “The board left the issue open for a two-week public comment and passed the measure at the next town meeting with a 3-2 vote.”

Lynn became the champion of the moment. Public support grew from various public meetings Von Lehsten attended in the neighboring towns of Riverhead, Shelter Island, East Hampton and Southold. Since the legislation passed in Southampton, the Committee has received multiple requests to make presentations in Patchogue, Port Jefferson and Huntington.

“I volunteered my time and dressed up in this silly outfit to emphasize the point that legislation is needed, because like cigarettes and seat belts, education alone is just not going to change human behavior fast enough,” she said.

Lynn recycled the plastic dress the day after her presentation, but she said she may be motivated to make another one to illustrate her point — a point that seems to be getting stronger with time.

Ettl praised his students’ ability to turn a classroom project into societal change.

“They learned a very valuable lesson that marketing is not all about just making money for companies. The principles can be applied to a host of areas other than just products and services,” he said. “In this case, they used the principles to address a topic with serious implications for our environment and how we can act as its caretakers on Long Island.”

More on plastics and the environment:

Microplastics Making Their Way Through The Food Chain, Right Up To You