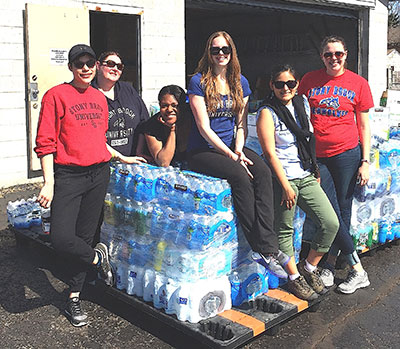 Six students in the Stony Brook University School of Social Welfare got a taste of experiential learning the weekend of April 14. They parlayed their classroom lessons into a way to help the stricken community of Flint, Michigan, which has been without clean drinking water for two years due to a lead-contaminated water supply.

The students interacted with the residents and interviewed community leaders, gaining insight into the hardships and reality of a crisis that has garnered worldwide attention.

The six students collaborated with several Long Island organizations that helped them collect the supplies and raise $2,000, which was directed to the Flint Child Health and Development Fund. The fund specializes in child-focused health interventions for those diagnosed with lead poisoning.

Following the students’ visit, Mattiuzzo reached out to Charles Robbins, vice provost for undergraduate education and dean of Undergraduate Colleges, with lavish praise for the students.

“These students could not have represented your university any better. They were respectful, earnest, genuinely curious, diligent and kind to everyone they encountered. Stony Brook shone brightly on Flint that Saturday,” said Mattiuzzo.

Jacqueline Mondros, dean of the School of Social Welfare, said, “These students are outstanding examples of the best of social work. I am so gratified that they will hold an SBU degree.”

The outreach mission to Flint is the brainchild of Lindsay. Although the donation drive wasn’t her first community project, it was Lindsay’s first service project outside the Stony Brook area. The senior, from Medford, Long Island, who will be attending Tulane University to continue her graduate education in social work, has organized fundraisers for a toddler with leukemia, distributed holiday meals for the underserved and has volunteered at Stony Brook University Hospital.

She remembers the outrage she felt when she read an online article about the water crisis in Flint, and how it galvanized her to take action.

“I was so angry and hurt that this community was suffering at the hands of those who were supposed to protect them from disasters such as this. The unbelievable feeling of needing to help in any way is what ultimately pushed me to this decision,” she said.

Lindsay reached out to her fellow students and they immediately got on board with her idea.

“This trip reiterated to me why I chose a career in social work, helping people and promoting change and advocacy,” she said.

Tiffany, of Central Islip, New York, makes it a priority to participate in at least one out-of-state project a year. She said that Lindsay approached her at the end of the fall semester about initiating a donation drive for Flint residents. In mid-February, Tiffany took on a leadership role planning the project. She set up supply drop-off stations on Long Island at the office of Assemblyman Phil Ramos (D-Brentwood) in conjunction with the non-profit organization, the Long Island Women of Vision Coalition, as well as the Department of Motor Vehicles and several school districts. She then secured an 18-wheeler truck and driver to transport approximately 280 cases of water.

The day of the journey, the group left New York at 8:00 pm and drove through the night, exhausted by work, homework and transporting water during the week.

Not everything flowed smoothly. Arriving in Flint the next morning at 9, ready to check in to their motel, the concierge told them they had the wrong reservation check-in time. The motel thought it was for the night before and when they did not arrive, it was cancelled.

“We explained that we had just driven 12 hours from New York and asked if there were any other rooms available,” said Lindsay.

“We were instructed to go to the dining room and have a complimentary breakfast,” she said. “By the time we finished eating, the concierge had found a room for us and we shared two double beds and a rollaway cot. Pastor Mattiuzzo was gracious enough to offer to pay for our hotel accommodations.”

A little later, the pastor called to let the group know that the truck transporting the water to Flint had broken down more than three hours away in Ohio. After the truck was repaired, the group dispatched someone to guide the driver who had gotten lost.

Tiffany said that the high point of the trip to Flint was not merely delivering water to the city’s residents, but also speaking with and on some occasions even praying with them.

“It’s a different experience to read about situations like this in a newspaper than to sit across from a family that is forced to rely on delivery of bottled water for their bathing, drinking and cooking needs,” she said. “We take these things for granted when we brush our teeth, wash our fruits and vegetables, or drink a glass of water.”

Tiffany also made an important distinction between life on Long Island and in Flint, explaining that on Long Island, there are pockets of wealth and poverty within any given town, but the city of Flint is mostly impoverished, much like the rest of Michigan since the auto industry crash.

“We came to Michigan not just to deliver water, but also to truly gain an understanding and experience of what it is like to deal with a situation as serious as this,” Tiffany said. “Failure was not an option. We are social workers and service to the community is our job.”

As many have returned to work – with others getting ready for the official start of spring semester – here’s what you should know and do (a few new items and some important reminders) to help keep us all healthy and...