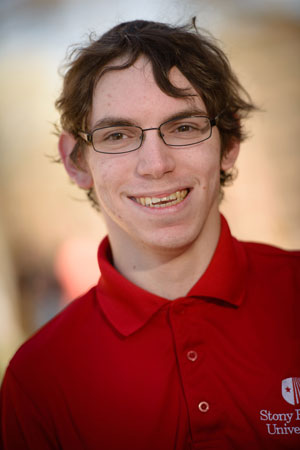 Born with a form of cerebral palsy that necessitates relying on upper-body strength for mobility, Eric spent much of his academic career at Stony Brook using his experiences to develop technology that will help students, disabled or otherwise, lead less stressful lives.

“He’s a problem solver,” said Kathleen Paterno, director of Disability Support Services (DSS). “Eric knows how to get around obstacles and he’s flexible. Those are vehicles for success.”

Until he attended Stony Brook, Eric depended on a walker for transportation, but because the campus is so sprawling and has some hills, he used a motorized scooter. The scooter will not operate in wet weather, and on those days when precipitation was light, Eric drove his car from his dorm room to a parking lot that was close to his class. He then finished the journey with his walker.

“On bad weather days, I stayed in my room learning material using textbooks and ordering food in,” he said. “Luckily, my professors were understanding and worked with me to create a study plan so that I didn’t fall behind. These past few winters, I was stuck inside a lot.”

Even though most buildings on campus are scooter-accessible, Eric sometimes encountered situations in which the motorized vehicle did not fit in certain rooms. He said that DSS and facility managers would try to remedy situations when Eric brought them to their attention.

“Instead of giving up, I look for things around the room that can support my weight and used them, such as handicap grab bars, to get to my destination,” Eric said. “For me, life is all about being able to adapt and be flexible.”

Adapting to how other students perceive his disability, however, is daunting for Eric. “What surprises me most about human nature is the extent to which people seem to generalize disability,” he said. “Many people assume that a physical disability also affects cognitive function, and when they meet me for the first time, they talk slowly.

“I often have conversations with my friends about how interacting with me has changed their perspectives about disability,” Eric said. “They say that originally they were concerned that they would have to help me all of the time, but they soon came to realize that I am more independent than the majority of college students.”

That independence can be traced to Eric’s aptitude for critical thinking. “The kinds of projects he’s worked on demonstrate a lot of initiative,” said Tony Scarlatos, a lecturer in the Department of Computer Science.

One of Eric’s projects was an application that he designed for Scarlatos’ Human-Computer Interaction class that was presented at the annual Undergraduate and Research and Creative Activities symposium and the Center of Excellence in Wireless and Information Technology conference. That application, dubbed Emote Control, was developed with support from the Center for Prevention and Outreach and used software that featured a brain-computer interface that measured stress levels and provided numerous multimedia exercises to manage stress.

“Users of the Emote Control see their emotional state in real time, indicated in a color gradient from cool to warm, embedded in the interface as they work through the activities,” said Eric.

As a research assistant, Eric designed software that could be displayed on Stony Brook’s Virtual Reality Deck, the 1.5- billion-pixel, 360-degree screen at the University’s Center of Excellence in Wireless and Information Technology. Scarlatos nominated him for the work he did on that project and Eric was honored with an Undergraduate Recognition Award in 2014.

In April, Eric witnessed the rollout of a reality game he created called “All Together Now,” which enabled a small group of students using wheelchairs to stay connected via social media while navigating to different locations on campus. The photos they took with their mobile devices were proof that they reached their destinations.

That same month, Eric met a personal challenge head-on when he fulfilled a goal he set while a freshman. With the encouragement of his suitemate Dominik Wegiel, Eric navigated three miles of Circle Road in 90 minutes using his walker. Although he became something of a Facebook favorite on campus, netting more than 1,100 likes, Eric said that his only motivation was to improve his performance from the year before, when it took him three hours to walk Circle Road.

Now that he has graduated, Eric is ready to leave the debilitating snow behind for a warmer clime, perhaps the West Coast, as he eyes his next career move.

“Many of the prestigious employers such as Google and Microsoft would be lucky to get someone like Eric, a creative thinker who can also execute what he designs,” said Scarlatos.

“When life revolves around adapting, even the most stressful of situations become adaptable,” Eric said. “Keeping that in mind, I do not become stressed, I merely look for solutions.” 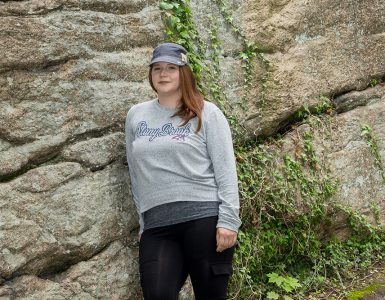 Graduate student Johnnie Paola Cullinane has found another home at Stony Brook University, one that presents much-desired challenges while making her feel like she belongs. Studying for a master’s degree in Human... 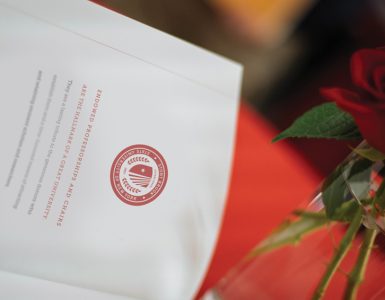