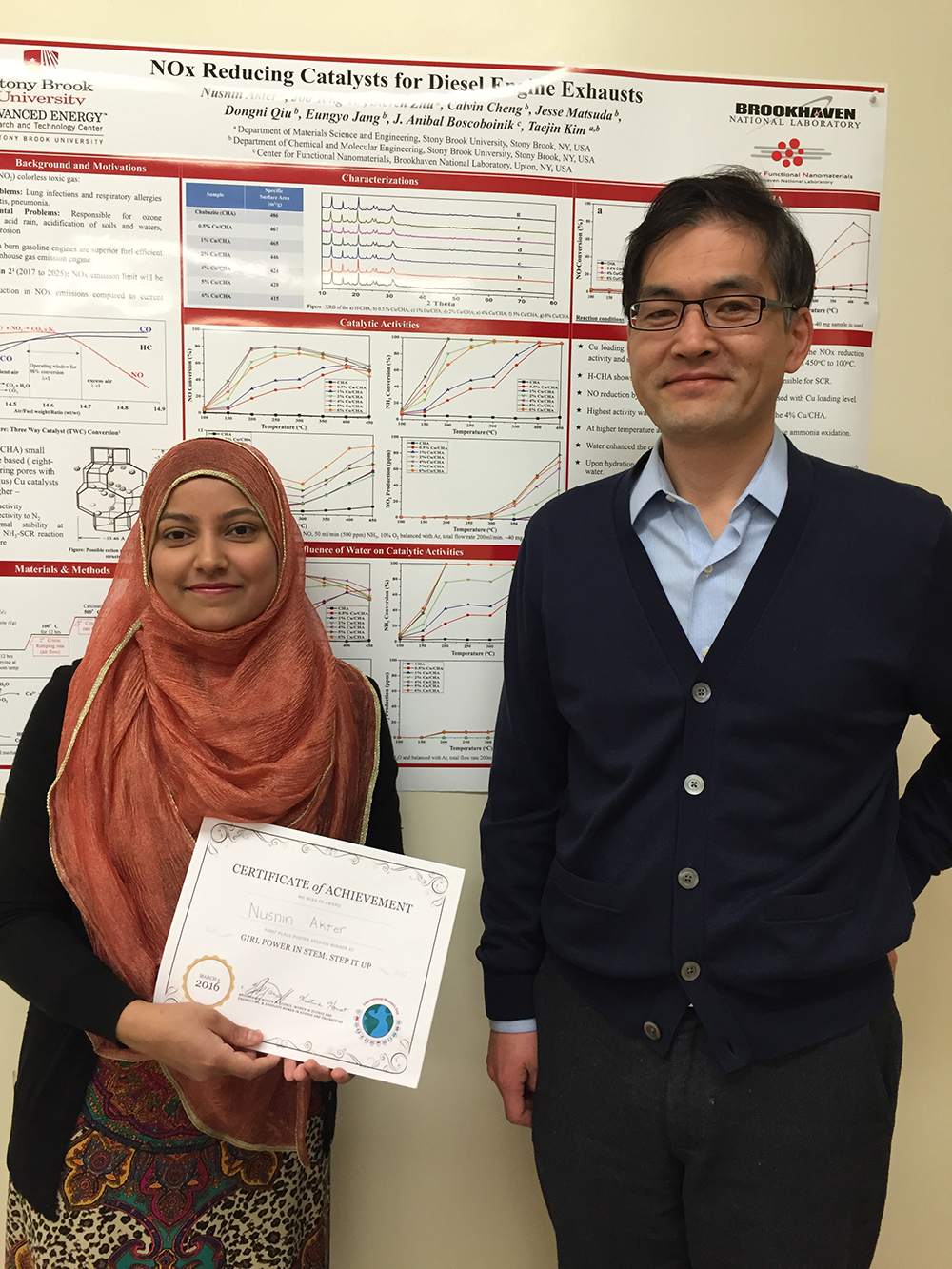 Nusnin Akter, a materials science and engineering graduate student mentored by Professor Taejin Kim, won the first place poster award at the “Girl Power in STEM: Step It Up!” symposium that was held on campus March 5 to celebrate the accomplishments of women in Science, Technology, Engineering and Math (STEM) fields. She received the recognition for her research, “NOx Reducing Catalysts for Diesel Engine Exhausts.”

Akter has been investigating the transition metal exchanged zeolite catalysts for reducing NOx from a diesel engine. At Stony Brook (with PI Taejin Kim) and at Brookhaven National Lab (with PI J.A. Boscoboinik), she performs several tasks, such as catalyst synthesis, activity testing, and surface reaction measurement using different spectroscopic techniques. The project is supported by a SBU-BNL seed grant, and research is also done at Stony Brook’s Advanced Energy Center.

“It is my great pleasure to work with Nusnin, and she is definitely a worthy recipient of the award,” said Kim.

“As a woman in science, I am very excited and honored to receive the first place award,” said Akter. “This award has inspired me, and I believe it can encourage other women out there. These kinds of programs and events help to increase women’s participation in STEM and enhance our quality of life.”

Akter also received the second place poster award from The Catalysis Society of Metropolitan New York at the 2016 Spring Symposium on March 23, 2016. The Catalysis Society is a non-profit organization founded in 1958 to promote and encourage the growth and development of the science of catalysis in the New Jersey and Metro New York areas. The symposium was held at Rutgers University and was sponsored by Rutgers, Exon Mobil, Agilent, BASF, Harrick Scientific, HEL, Quantachrome, and Rive Technology.

“It was a privilege to present my poster at their annual symposium and meet with academic and industry experts who are interested in innovation in science and technology,” said Akter. “This event was really exciting because I saw first-hand the connection between my academic work and real-world industrial application. This award will encourage me to keep working hard and inventing new innovations for the future.

After she receives her PhD from Stony Brook, Akter wants to do catalysis research at a national laboratory, such as BNL, and also hopes to help young women scientists in academia.

The Society for Vascular Surgery’s Vascular Quality Initiative (SVS VQI) has once again awarded Stony Brook University Hospital three stars for its active participation in the Registry Participation Program for 2020...