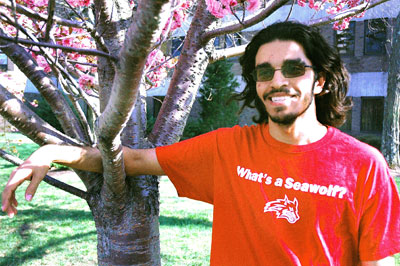 Stony Brook University Honors College physics and mathematics major Dhruv Dixit ’16 was named a 2015 Goldwater Scholar, only the 34th Stony Brook honoree since 1992. The award is among the most prestigious honors given nationally to college undergraduate students.

But he didn’t find out the conventional way.

“One of my friends sent me a text saying, ‘Congrats on Goldwater, but because I was unaware that the 2015 results were out, I replied, ‘What?’ said Dhruv.

His friend told him that if he didn’t believe her, he should look at the Goldwater Scholarship Web site. But Dhruv had to rush off to class so wasn’t able to confirm it for a few hours. And that’s when he saw the good news.

Dhruv, a resident of Hopkinton, Massachusetts and originally from Gujarat, India, is a part of the Stony Brook Relativistic Heavy Ion Group and the PHENIX collaboration, whose research focuses on studying the early stages of the universe.

These high-energy collisions give rise to new states of matter beyond the standard solids, liquids, gasses and plasma.

“One such state of matter theorized to exist is called color glass condensate (CGC), which can be thought of as a pancake of gluons,” said Dhruv. “We are working on proving that this new state of matter exists.

Dhruv said that understanding the interactions between quarks and gluons helps scientists understand a fundamental force of nature known as the strong nuclear force.

His research team built a detector last year that is currently recording data at BNL and next year Dhruv and his crew will analyze and interpret the data. The detector helps separate the photons that result specifically from quark and gluon interactions, and other photons.

Even though physics and math focus on the big ideas in the universe, Dhruv said that it leads to universal truths in many other disciplines. “The skills and knowledge that I learn in those fields can be applied to so many different areas, from accounting to economics, risk management and analysis, to quantitative biology, and even art and music.”

The scholarship will cover the cost of tuition, textbooks, fees, and room and board for Dhruv’s senior year.

“My recommendations played the largest role in my receiving this honor,” Dhruv said. “I do not think I would have been chosen had it not been for the support from my professors (Abhay) Deshpande, (Thomas) Hemmick, (Barbara) Jacak, Dean of the Undergraduate Colleges Charles Robbins and URECA Director Karen Kernan.”

Dhruv is planning to seek a PhD in physics following graduation.

—Story and photo by Glenn Jochum