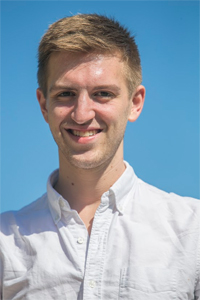 The URECA website regularly features students’ perspectives on research and/or creative activities. This month’s student is David Harary, a senior majoring in music who has been involved in neuroscience research in the laboratory of Professor Mary Kritzer, from the Department of Neurobiology and Behavior, since his junior year. Funding for Harary’s project, “Non-Motor Symptoms of Parkinson’s Disease: Roles for Sex and Sex Hormone Effects on Subthalamo-prefrontal Connections” was provided in Summer 2014 by URECA. He will be presenting a poster on his research at the upcoming URECA undergraduate research exhibition on Wednesday, April 29.

Harary is a clarinetist/bass clarinetist, and he recently performed an honors senior recital at Staller Center under the mentorship of Professor Emerita Sarah Fuller and Doctoral Candidate Taylor Massey. Harary was a finalist in the 2014 and 2015 Stony Brook Undergraduate Concerto Competitions, and he has been involved with chamber and orchestral music ensembles at SBU.

In his freshman year, Haray was named a Leadership and Service Undergraduate College Fellow. He has served as a teaching assistant for organic chemistry and as a student advisor to the dean of the College of Arts and Sciences. He is also a rower with Stony Brook University Crew. After attending a one-year master’s in neuroscience program at King’s College London, he plans to go to medical school.