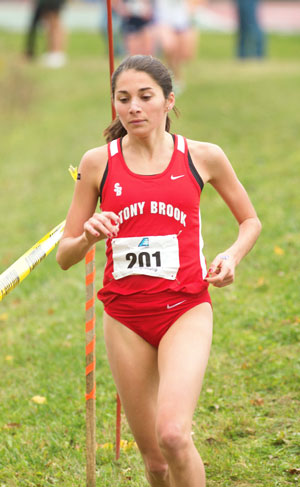 Running is far more than a sport to Christina Melian ’16 — it’s a way of life.

The medical school aspirant and Stony Brook cross countryand track and field star has even left the possibility open for a professional career, or a trip to the Olympics someday, but for now it’s one race and one class at a time.

“I’ll always run, even if it’s not competitively, since it’s such a big part of my life,” said Christina, who in 2010 first experienced the proverbial thrill of victory as a freshman, when the “six-peat” America East Seawolves cross country powerhouse was in its final year.

As a senior, Christina is back in the spotlight, twice winning America East Performer of the Week in September. Equally exciting to the health science major is that on October 31, Stony Brook is hosting the America East Championships.

“We don’t really compete at home too often and it’s not every year you host a conference, so it will be great to have some home support and be able to put on a show for everyone,” she said.

She is fresh off one of the most meaningful athletic achievements of her storied career, having won the prestigious Battle of Beantown in Boston in September, defeating opponents from the four nationally ranked teams of Dartmouth, Georgetown, Providence and Syracuse.

“Winning Beantown has given me more confidence going into future races,” she said. “It has proven that I belong up front with some of the top girls. I want to be one of the big names that people are afraid to race against.”

Christina said that her proudest moment as a Seawolf runner was winning the 3,000 meters at the U.S. Junior Championships at the end of her freshman year. That high was followed by an injury that kept her off track most of her sophomore year.

“I was heartbroken,” she said. “I felt like I missed so much and doubted whether I would get back to my healthy self again, but I worked really hard on my time off and seeing everyone else racing kept me motivated.”

“Andy is one of the few coaches who was willing to take a chance on me although I wasn’t a top high school recruit back in the day, and I am grateful for that,” said Christina, who was a basketball player until she entered high school. “I only got into running to keep busy in the off season,” she said.

Coach Ronan summarized her impact on the Stony Brook athletic program this way: “After Olivia Burne graduated, Christina took over as team leader and her work ethic and performances speak for her. With two years remaining, she has the ability to become one of the most successful athletes in the program, if not in the history of Stony Brook University.”

In high school Christina joined the cross country team and loved it so much, she dropped basketball altogether. She became a serious runner as a high school senior when she realized she might be able to continue on the college level.

Her favorite event is the 5K. “I love how you can get into a rhythm and let the race unfold. It is a very strategic race,” Christina said.

On the academic side, running has other benefits for Christina.

“Honestly, if it weren’t for running I don’t think I would be nearly as organized,” she said. “It helps me prioritize and manage my time better so that I can excel both on the track and in the classroom.”

Christina credits Rickard with helping her make the most of her time at Stony Brook, in planning for the future, and serving as her academic and emotional support system.

Even in her health science major, Christina’s research is related to running — it involved studying vibrating platforms that are being used in the athletic training room to help prevent stress fractures.

“The initial purpose of these platforms was to help increase bone density in patients suffering from diabetes,” she said. Patients stand on the board for ten minutes a day, allowing for the conversion of stem cells to bone cells and helping to prevent diseases such as osteoporosis.

However, it is believed to work just as well in athletes who may be susceptible to fractures.

“As part of my research, I will be using the track team as a test group to see if these platforms can actually help prevent fractures. If they prove to work this could be a saving grace for many runners.”

Christina also performs volunteer service at Stony Brook University Hospital, and that has reinforced the value that doing the little things for people can really make a difference, such as keeping patients company in between treatments at the Department of Oncology.

With her good friend, former Seawolves cross country star Gabe Vasquez, she is also helping to carry on the work of The Supply, a non-profit organization that helps raise awareness about the slums in Kenya.

The lessons learned from volunteering will be with me when I pursue my medical career,” Christina said. “As a doctor, I hope to help change the lives of my patients and do the best I can to make a difference, no matter how small that might be.”