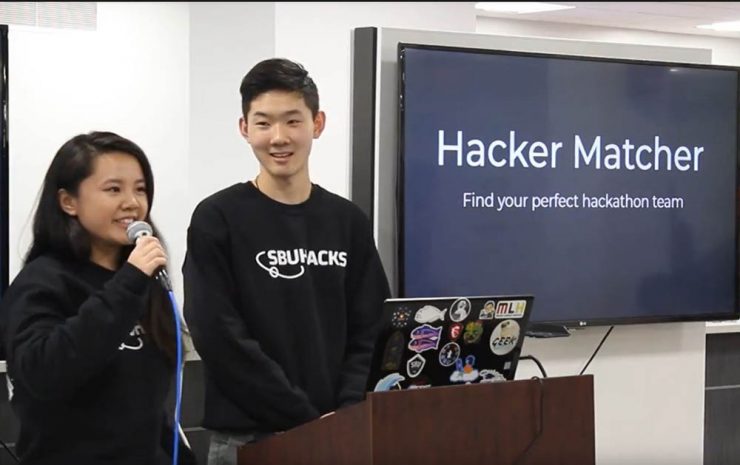 Jenny Xu, a junior in the Department of Computer Science in the College of Engineering and Applied Sciences, is a hackathon veteran. She’s attended hackathon events across the US and was a member of the SBUHacks.org committee. Inspired by her previous hackathon experiences, and building on a project she first started at the PennApps hackathon, she debuted Hacker Matcher at this year’s SBUHacks event.

Hacker Matcher is an app for team building at hackathons. We spoke with Xu about her inspiration for the app, its development challenges and her plans for Hacker Matcher’s future.

When did you get the idea for Hacker Matcher?
Hacker Matcher is a service that helps improve hackathon experience for everyone. The idea originated from where you’d imagine–a hackathon! When I attended PennApps (the oldest, and most prestigious, student hackathon) for the first time last fall, I was surprised to find that there wasn’t a systematic way for team formation, even though that really is the most integral part of your overall hackathon experience. Hacker Matcher was my PennApps hackathon project and I saw a lot of challenges and learning opportunities with it. I decided to extend a small hackathon project to my summer side project, and now to a usable service.

Did you work on/develop it by yourself?
In the beginning, I developed it on my own without anyone’s help–and that proved to be extremely difficult. I built the service from scratch, which means I had to handle a lot of technical areas all by myself. However, I was able to build a minimum viable product (MVP) by the end of the summer and deployed it to a few small hackathons last year. After an initial round of testing, I discovered many  technical improvements and decided to rebuild it last summer with a separate technology stack. That is when I recruited Anthony Xiang (an Applied Mathematics and Statistics/Computer Science double major at Stony Brook) to split the work by frontend and backend.

What were the results of the app’s use at SBUHacks 2019? Was this the first time it was open for widespread use?
We had about 70 users and 4 teams formed from its use, discovered a few bugs and got feedback on design improvements. Overall, we learned a lot from the experience, but wish to accomplish more next time with a further developed product. I had previously deployed the first version of my app at the HackitTogether, HackRPI and Hackital hackathons.

What are your plans for Hacker Matcher’s future?
I want to deploy our service at more hackathons so that it can become something actually helpful. As it develops a bigger reputation and additional features, we would like to start charging hackathons to use it as a tool that not only helps hackers, but that can also provide data insights on hackers and offer a registration system. Hackathons normally spend $100 to $200 on each hacker for their food, clothes, accommodations and swag. We think it would be reasonable to charge $1 to $5 for each hacker. We also hope to expand to phone apps and evolve into a general-purpose hackathon tool.

What advice would you give to other students who have an idea for creating an app or a hack?
I think there is a lot of potential in the Stony Brook community and it would help if Stony Brook would be more supportive by having more entrepreneur resources and external encouragement. My advice to anyone who has an idea, would be to first have a clear set of goals of what you want to get out of it. It can get very difficult sometimes, and the only things that supported me throughout is why I started it in the first place and imagining accomplishing my goals. With clear goals, my only advice would be, “Just do it.”

Xu’s long-term, post-college goals are to work at one of the Big Four tech companies, learn more about the industry, network with very talented people to do a startup and eventually start her own business.