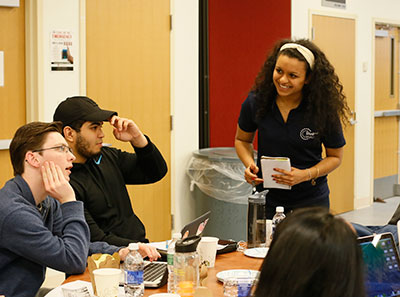 Students at Stony Brook now have an organization watching out for their culinary needs — the Student Voice on Campus Dining Committee.

The committee, formed last fall, is made up of 16 student representatives for both residents and commuters. Together these students embrace the challenge of serving 25,000 of their classmates, attending to the health and satisfaction of a highly diverse demographic that includes gluten free, kosher, halal, vegetarian and vegan diets.

“Nearly every student has, at some point in the semester, eaten on campus, and often do so multiple times a day,” said Thomas Kirnbauer, advisor for the committee and vice president of the FSA Board of Directors.

“The committee should be commended for its diligence and persistence advocating on behalf of the student body,” Kirnbauer said. “I have visited several other campuses throughout New York State and we have one of the most integrated and flourishing student-driven dining committees.”

Student Voice chair is sociology/biology major Shannon Sunny ’16, who is optimistic about the program’s early success. Her role is to coordinate between student reps and the Campus Dining and Faculty Student Association (FSA) advisors, as well as between the committee and the student community at large.

“I want to make sure that the student body feels empowered to be their own advocates by using all of the resources available to them, including Student Voice,” Shannon said.

Representatives from the residence halls are organized into three “neighborhoods” — the Student Activities Center (SAC) and Roth; West Side Dining and Tabler; and the Stony Brook Union and Jasmine. Two designated commuter students on the committee belong to the SAC neighborhood, since commuters most frequently eat in the University’s central dining facility.

Student Voice has made tremendous strides in improving the Campus Dining program, Kirnbauer said. For example, the committee solved the problem of overcrowding at the coffee station in the SAC dining area. Their recommendation – placing sugar and milk outside the station – instantly eliminated long lines.

The committee also successfully pressed for consistent pricing and portion size for samosas at Bombay Taco and arranged for the return of the healthy $5 meal option. The Union/Jasmine subcommittee reintroduced a student favorite — gyros — to the Union Commons.

At West Side Dining, “Foodies Unite,” a sit-down plated dinner begun last year and available to groups of students featuring entrees that are usually not on the menu at the dining hall, is being reintroduced. Student Voice also successfully advocated for a delivery option on campus: “Fired Up” pizza delivery, managed by West Side Dining.

Committee representatives are dedicated. They attend weekly meetings, participate in once-per semester town hall meetings, and avail themselves of opportunities to elicit student feedback, making appearances at campus events such as Scoopin’ Out Success, 2nd Night Out, and Food Day.

The Committee works closely with FSA and Campus Dining advisors such as Kirnbauer, Dawn Villacci and Kevin Kelly, alongside the FSA Marketing team led by Angela Agnello.

To this end, a representative from each neighborhood manages a spreadsheet that includes suggestions for Campus Dining.

A new feature, an Improvement Tracker, is the brainchild of senior mechanical engineering major Jason Mazza ’16. The tracker, monitoring student recommendations and their implementation, is available online at stonybrook.edu/commcms/fsa/about/student-voice/improvements.html.

For Shannon, the best part of Student Voice is the opportunity to improve life at Stony Brook for her fellow students.

“It’s immensely satisfying to be the reason someone’s day is made a little better,” she said.
— Glenn Jochum