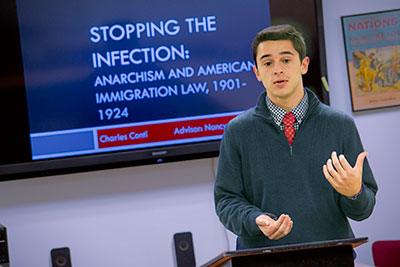 When University Scholar Charles Conti ’16 received the Catherine Wang Award last spring at the Department of History convocation, he also was named “the student most likely to make history.”

Indeed, in the Department of History, Distinguished Professor Nancy Tomes said that the political science major from Rocky Point, New York, “clearly possesses a talent for connecting events of the past with what is happening today.”

One example of Charles’ knack for blending the past with the present is implicit in a paper he presented at the Undergraduate Research and Creativity Activities (URECA) symposium about how anarchist terror was used by politicians to justify restrictive immigration policies in the early 20th century.

And for his honors thesis, Charles is tackling a project on Charles Coughlin, a demagogic priest, and his impact on American politics during the Great Depression.

“Father Coughlin transcended the separation of church and state in a way no one else in this country has before or since,” said Charles. “He began his career as an ally of Franklin Roosevelt but by the time his career ended, he was labeled by many as an anti-Semite and Nazi sympathizer. I seek to explore that transition and what it tells us about the changing political atmosphere in the United States.”

Charles’s approach to history reflects Stony Brook’s vibrant Department of History curriculum, which emphasizes bringing the past to life.

In Professor Michael Barnhart’s World War II Simulation course, each student is assigned a character — a policy maker from the 1930s or 1940s — to embody. Charles selected Franklin D. Roosevelt and spent a semester immersed in FDR’s legacy and goals.

Tomes said that Charles has an instinct for picking a good topic along with research skills that few students possess.

Add a literary expertise to that skill se: Charles also serves as the editor of the Libertas Journal of Political Science, an undergraduate academic publication for Stony Brook’s political science majors.

Charles had enrolled at Stony Brook as a Presidential Scholar, a four-year merit scholarship based on superior GPA and SAT scores and funded by philanthropy.

He said his interest in history began at a very young age when his father would quiz him on baseball trivia.

“I was probably the only 5-year-old around who could not only tell you that the Brooklyn Dodgers won the World Series in 1955, but also name the starting lineup used to pull off the feat,” he said.

His father sparked Charles’ interest in history, but it was his mother who redirected that fascination to politics.

“My mother gave me a book about each of the presidents and I would not be exaggerating to say that I read it so many times, I memorized the information it contained,” Charles said.

Charles doesn’t take a break from history when school is out of session. Last summer he interned at the Suffolk County Historical Society in Riverhead, helping to plan exhibits about the history of shoemaking and the rum trade on Long Island. He also created an audio tour of an existing exhibit about Long Island’s shipbuilding trade.

What are Charles’ long-term goals? He has many, among them are writing a book that will be reviewed by The New York Times, being a government consultant or one day becoming a university president.

Tomes, however, said that whatever Charles chooses to pursue, she hopes he will use his talents to continue what she and Barnhart are doing — trying to bring history to life for young thinkers in a higher education setting.

“I think Charlie is well-equipped to keep that tradition going,” said Tomes.