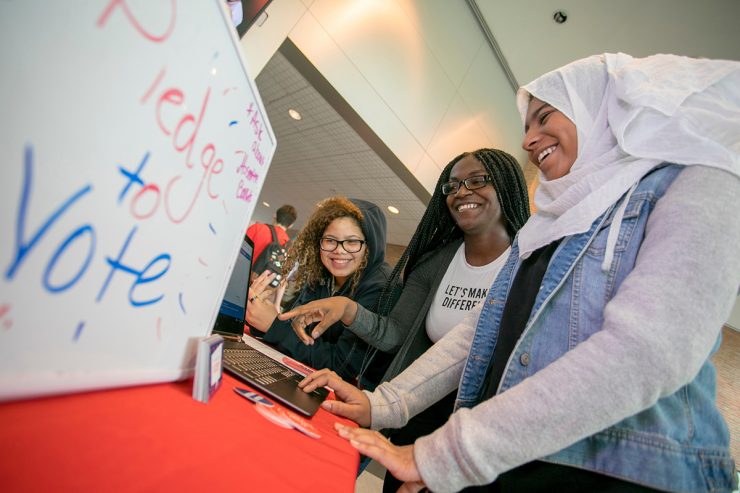 The Center for Civic Justice has been recognized with a National Association of Student Personnel Administrators (NASPA) award, an invitation to the Harvard Institute of Politics, and for its students’ role in making New York State voting more accessible.

“These recognitions really are a testament to our students and the work they have done these last several years and will continue to do,” said Steven Adelson ’15, Co-Director of the Center for Civic Justice. “It also shows that Stony Brook continues to lead the charge when it comes to civic learning and democratic engagement.”

The Center has been a vision of Adelson’s since 2014. The Civic Center officially began in Spring 2018 as a virtual center that provides support, services and coordinations for programs and opportunities that engage students who are passionate about issues affecting their communities. Among many examples is their Community Dialogues, an initiative where students, faculty, and staff get together to have civil and insightful discussions about our nation’s most pressing issues such as immigration, the #metoo movement, and most recently, a divided government.
Recently, students have advocated for new voting policy by becoming vocal at Stony Brook University and through local nonpartisan organizations. Some of the policies include early and same day voting, voter status portability, and consolidating primaries.

“This is the first time that the New York State Assembly has flipped as far as control, and who’s controlling it,” said Yark Beyan, Student Team Leader at the Center for Civic Justice. “With a 450% increase in on-campus polling, we see that as a direct correlation.”

“For the last several years, our students have been vocal at Stony Brook University through local nonpartisan organizations advocating for voting rights to ensure that their peers and other voting members had easier access to their right to vote,” said Adelson.

Harvard Institute of Politics further commended the Center for Civic Justice with an invitation to their Civic Engagement Conference in February. There were only 30 schools at the conference.

“This is the first time that Stony Brook has been invited to this super-exclusive event and conference,” Beyan explained. “These are schools that have been recognized as leading the youth engagement movement.”

Beyan feels that the awards help legitimize the Center.