Bryan Szeglin ’16 Is a Driving Force 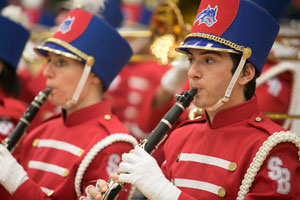 Biochemistry major Bryan Szeglin ’16 applies the same zeal to his scientific research as he does to everything else he tackles, whether he’s acting as the heart and soul of the Scholars Book Drive or as a leader of the Spirit of Stony Brook Marching Band.

That dedication has resulted in a perfect 4.0 GPA for all five semesters that he has been at Stony Brook.

Academics aside, it is Bryan’s involvement in the University Scholars Book Drive that best captures the essence of his inner drive and perseverance. Bryan was the prime mover behind the drive, organizing it, drafting a formal proposal and then contacting local school district officials. He met with advisors and school principals, designed and made collection bins, planned a fundraiser, ran an advertising campaign, constructed a website and social media pages, organized and ran meetings, and transported books to campus.

Bryan comes from a family of avid readers and book collectors, but many of his favorites wound up collecting dust and taking up space in his basement, prompting him to box them up for donation to local libraries. But he soon learned that libraries and Internet charities either wanted only new books or accepted specific titles. He began talking about this problem with his friends and soon realized that it was a common theme in many households. Discouraged for the time being, the books continued to collect dust — that is, until he came to Stony Brook and became involved in the University Scholars Program.

Talking to good friend and Stony Brook student Gabrielle Khalife about his idea last year, Bryan revisited the idea of a book drive. He marched into the office of University Scholars Advisor and Senior Staff Assistant Jeremy Marchese and told him that he wanted to do a book drive. Marchese automatically replied “OK” so Bryan specified, “I mean a really big book drive. Long Island-wide.”

Marchese didn’t bat an eye. “He wasn’t fazed by the size of the project or the logistical nightmare it entailed. He really thought we could pull it off,” said Bryan.

Bryan next consulted with Dean of Libraries Constantia Constantinou, who offered her support and told him about BetterWorldBooks, an organization that makes a global impact on literacy through donations, even accepting books in poor condition for recycling.

Then began the process of pitching his idea to Stony Brook administrators who could help his idea reach fruition — among them the Vice Provost for Undergraduate Education and Dean of the Undergraduate Colleges, Charles Robbins. With Robbins’ approval, he reached out to local schools, sending formal letters to superintendents and following up with phone calls.

Bryan then augmented his approach by contacting the principals of local high schools and middle schools directly. While he was waiting for a reply, he and Khalife formed a 17-person Scholars Book Drive Committee and launched social media accounts on Facebook, Twitter and Instagram, as well as creating a website.

Port Jefferson and Mount Sinai school districts were next to hold drives, followed by Smithtown. So far, the drives have netted more than 3,000 books, but Bryan has set a goal of 15,000 donations from 10 districts by the time he graduates next year. Timothy Ecklund, assistant vice president for Student Affairs and dean of students, helped the committee secure a storage space for its growing collection.

Bryan has demonstrated drive in other areas of his life. His involvement with the Spirit of Stony Brook Marching Band includes leading the 25-person clarinet section, teaching his fellow musicians how to march, working with professional staff at leadership meetings, and organizing education events and workshops for the band.

In the lab, Bryan is equally driven — by the quest to understand and eradicate disease. In his research at the Center for Understanding Biology Using Imaging Technology, a part of the Department of Psychiatry at Stony Brook Medicine, he is seeking to elucidate the structural markers of Major Depressive Disorder.

Working with Christine DeLorenzo, the Center’s director, Bryan is focusing on two different projects that deal with magnetic resonance imaging. The first seeks to determine the accuracy of measuring the thickness of the cortex, the brain’s outer layer, and the other studies the pathways of brain cells known as neurons, whose bundles make up the organ’s pathways.

“Many diseases, such as depression, bipolar disorder and schizophrenia manifest when these tracts are not very healthy,” said Bryan.

But Bryan said he will not rest until he has helped find a cure for cancer. His research at Stony Brook has given him the practical skills in radiology and neuroimaging to aid him in his multiple internships at Memorial Sloan-Kettering Cancer Center.

“I want to take what we know in the laboratory and apply it directly in the clinic to stop this pandemic in its tracks.”