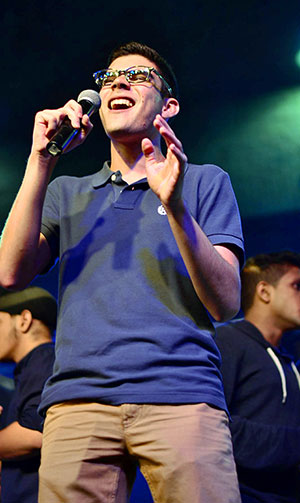 Computer Science major Brandon Cuadrado ’17 came to Stony Brook so that he could focus on a career path that emphasized product development rather than theoretical work.

By all accounts, while still in school, he has already realized his goal.

While working as a student staff assistant at the Office of the Dean of Students, the Ronkonkoma, New York native created an ID swiping system that collects quantitative data for all students who visit the office. The data collected allows the Dean’s Office to look at the big picture when analyzing the services it offers, helping administrators to understand who is visiting, how often and why.

“There was really no quantitative data,” Brandon said. “The ID swiping software allows us to make connections and relationships.”

In addition, Brandon found a way to bring together his interest in music with technological knowhow, collaborating with a lab partner to develop a musical conducting simulator.

“In high school, my favorite subjects were math and physics,” Brandon says. “Although I enjoyed these fields, I found a fascination in the logic of making popular pieces of technology, specifically with software such as social media websites.”

Brandon had no computer science background when he enrolled at Stony Brook. “The University truly expanded my potential beyond where I envisioned myself to be in four years,” he says.

He credits System Fundamentals I and II, taught by Professor Jennifer Wong, with bringing out the best in him and honing his work ethic by challenging him.

That laid the groundwork for a trio of courses he took taught by Professor Anthony Scarlatos in human-computer interaction, a specialization within computer science.

“This is where I saw my future,” says Brandon.

It was in Scarlatos’ class that he and classmate Yael Romero came up with the idea to create MyTempo, the aforementioned musical conducting simulator. The class’s main objective was to develop a semester-long project that highlights the interaction between user and technology. Brandon, a music lover, chose MyTempo, which employs an input device known as the Myo armband to enable wearers to use their arms to control mouse movements on a computer screen.

The initial prototype was created on Adobe Director using Lingo code to analyze a user’s position on the screen to the position along the conducting pattern that they should follow. Brandon and Yael’s results on MyTempo and its research implications will soon be published in the campus journal, the Stony Brook Young Investigators Review.

Brandon, who is a University Scholar, is currently the president of the Stony Brook High C’s, an all-male a cappella group. “I think that all students should engage in endeavors outside of the classroom, both as an escape and to benefit from the transferrable skills involved,” he says.

He plans to work within the computer science field after he graduates, focusing mainly on user experience and front-end software engineering, while pursuing a master’s degree.

Being on the front lines of the human-computer interaction revolution intrigues Brandon.

“Smartphones have completely changed the way that the general consumer interacts with society in the past 10 years alone,” he said. “User experience is a field in which more and more companies have begun to invest because user-friendly experiences have become the core of technological interaction. Essentially, an enjoyable and intuitive application will be far more beneficial than one that merely works properly.”