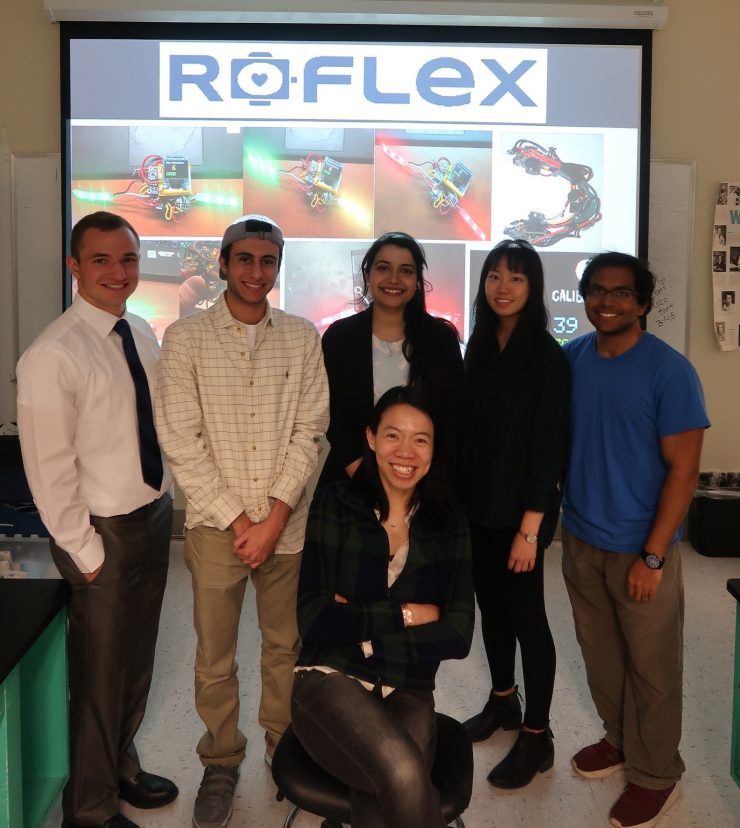 This spring a team of students from the Department of Biomedical Engineering (BME), part of the College of Engineering and Applied Sciences at Stony Brook University, competed in the finals of the New York Business Plan Competition (NYBPC) and presented Roflex — their medical device innovation for stroke patients — and detailed their business model.

Approximately 100 teams from 75 universities in New York participated in the competition. The students developed Roflex as a wearable device technology that stroke patients can use at home to monitor and gauge their rehabilitation practices. The device is worn like a watch. The broader aim of the Roflex project is to develop a wearable device for stroke rehabilitation and athletic training.

At the competition the Roflex team — made up of BME students Joseph Muller, Amna Haider, Yusef Saad-Eldin, Belinda Tang and Jimmy George — was placed in the “Fuzehub Products” category tract and won the People’s Choice Award, receiving the most votes for best product among 16 teams in the category. This opportunity helps students to implement their ideas in medical device innovation.

The NYBPC competition is the third award that the Roflex has received. In April the team won a first place award of $10,000 in the 2018 Stony Brook Entrepreneur Challenge, a program in the Small Business Development Center (SBDC) at Stony Brook University. This funding is being applied toward filing for the provisional patent and developing start-up to bring the product to market. Roflex then won first place again in the Regional Business Plan Competition among Long Island universities before going into the NYBPC.

“We are extremely proud of our entrepreneurial students and their mentors for winning this award,” said Stefan Judex, Chair of the Department of Biomedical Engineering.  “They demonstrated that they can take the skills learned in our rigorous BME curriculum and translate them into designing a promising product.”

“The Roflex team worked hard and wisely throughout the development of this stroke rehabilitation and athletic training device prototype,” said project advisor M. Ete Chan, Assistant Professor in the Department of Biomedical Engineering. “The team’s success in these three competitions is certainly encouraging, and I am looking forward to their continued success to move this project forward. They will serve as an excellent example for our BME students.”

The New York Business Plan Competition is the only collegiate business competition that is a regionally coordinated, collaborative statewide program connecting students from more than 75 two- and four-year colleges and universities, setting it apart from all other competitions in the nation. Students who have won first place, second place and third place in their respective regions are qualified and invited to compete at the state finals for the New York State Business Plan Competition.