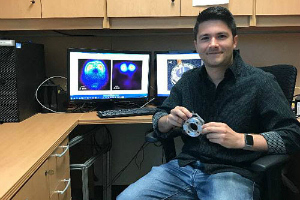 Biomedical Engineering PhD student Michael Salerno was awarded the 2017-2018 STEM Chateaubriand Fellowship, which is a grant offered by the French Embassy in the U.S. to support outstanding PhD students from American universities to conduct research in France.

As part of the fellowship, Salerno will receive support to go to France for nine months on a joint project, “Integrating Positron Emission Tomography (PET) and Functional Ultrasound (fUS) in the Behaving Rat,” to study the relationships between blood flow and neurochemistry during various behaviors.

“Mike’s breakthrough research aims to advance a new imaging modality that combines the sensitivity of PET imaging with the resolution of ultrasound in non-anesthetized patients — a significant development for the clinical care of vulnerable patients,” said Clinton T. Rubin, Chair of the Department of Biomedical Engineering (BME) in the College of Engineering and Applied Sciences at Stony Brook University. “This fellowship will provide a unique and transformative opportunity for Michael to extend his projects into new and exciting areas in a collaborative and global arena.”

Salerno’s research group at Stony Brook, led by Professor of BME and Radiology Paul Vaska, developed the RatCAP, a miniaturized, complete-ring, fully functional PET system, which enables imaging of a rat’s brain while it is awake and behaving.

The development of very high-rate ultrasound imaging (> 10,000 frames per second) by a team from Langevin Institute in Paris was shown to enable high resolution and high sensitivity in Doppler imaging of cerebral blood flow, leading to successful imaging of task-evoked changes in cortical activity by fUS. In collaboration with this team, a group of neurobiologists has developed a minimally invasive experimental setup for functional brain imaging in freely moving awake mice, allowing for the dynamic measure of cerebral blood volume with high sensitivity and high spatiotemporal resolution.

Different from PET, which measures brain activity based upon the tissue concentration of tracer at a given time, fUS distinguishes regions of brain activity based on increased blood volume due to neurovascular coupling. Thus, combining the two modalities would combine the high sensitivity and specificity of PET imaging with the high sensitivity and high spatiotemporal resolution of fUS, providing a multidimensional tool for studying the functions of different brain regions and their molecular constituents in freely moving awake rats. This hybrid imaging approach is being developed in collaboration with Dr. Michael Michaelides at the National Institutes of Health, who is an expert in applying behavioral and imaging technologies to biomedical problems such as drug addiction.

Before entering the BME PhD program, Salerno received a BS in Physics from Stony Brook in 2013 and an MBA and Advanced Certificate in Healthcare Management in 2015.

Chateaubriand fellows are selected through a merit-based competition in a collaborative process involving expert evaluators in both countries. The Science, Technology, Engineering, Mathematics & Biology-Health (STEM) Fellowship for doctoral students initiates or reinforces collaborations, partnerships or joint projects between French and American research teams.