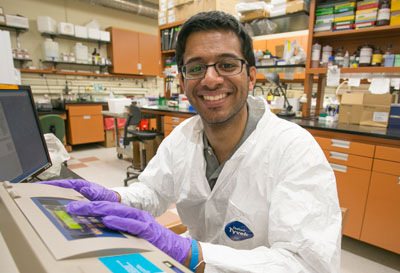 Part of getting an education is learning what you’re made of, especially when under pressure. Biology major Mathew Varghese ’15 has learned that life lesson many times.

When he was a high school student, Mathew volunteered at Flushing Hospital Medical Center, working at the front desk and answering patients’ questions.

“One doctor liked talking to me about medicine,” he said. “He would name a set of symptoms and asked me what I thought the problem could be. My knowledge of the human body came from my AP biology class, so I struggled every time.”

But the doctor’s interest in his opinion spurred Mathew on to pursue biology in college. He learned what impassioned him.

At the end of his freshman year at Stony Brook, Mathew was assigned to give a speech for the Undergraduate College of Human Development. He’d never written or delivered a speech before and said he had no idea how to begin. He only knew he wanted the speech to be sincere, optimistic and humorous.

So he began with a joke. “I hope that you are all enjoying the convocation so far. I know I am because there’s lots of free food and I am very, very poor.”

The room remained absolutely silent. He tried once more.

“That was a joke, so don’t be afraid to laugh, because there are going to be a lot more of them.”

That was the tension-breaker that won the audience over and Mathew learned the importance of persistence and trusting his instincts.

Right around that time, Mathew assisted doctors in the Division of Trauma, Emergency Surgery and Surgical Critical Care at Stony Brook University Hospital.

“I saw many of the patients struggle with their medical ordeals and could only imagine the hardships they faced. But I could tell they loved company, even if it only came in the form of a young volunteer,” he said. “The Hospital exemplified what it means to treat patients with more than medication. I learned that in medicine, the patient always comes first.”

Fast forward to Mathew’s junior year, when he was a teaching assistant for organic chemistry and he and his friend Esha Chebolu decided to hold a small review for students. Mathew expected no more than 20 students to show up but was greeted instead by the sight of nearly 60 people at Frey Hall, some of whom had to sit on the windowsills for lack of seats. Caught off guard, Mathew hurriedly printed out 40 more copies of the review notes. The lesson that day: Expect the unexpected.

During his sophomore and junior years, Mathew volunteered to travel with the Stony Brook Global Medical Brigades to Panama and Ghana, where he helped run a free medical clinic in a poverty-stricken community of 700. With only about 30 fellow students, the Brigade treated 600 people, and gave educational presentations on proper hygiene, wrote prescriptions and shadowed doctors.

“One of the Ghanaian doctors, Gideon, took the time to explain to me each patient’s health issues, and in the 90-plus-degree heat, he still made sure that every patient was cared for,” said Mathew. “It was inspiring how he looked beyond the disease and saw the patients as real people with real emotions. He taught me compassion.”

Having spent four years as a member of the campus chapter of UNICEF helping raise funds for that organization, Mathew learned self-reliance when he became its president in his senior year.

There was at least one more important lesson awaiting Mathew at Stony Brook.

By his own admission, Mathew was inexperienced in research, although he had a couple of lab courses under his belt.

“I knew that I could excel in research if given the opportunity,” he said.

Thanks to Assistant Professor Edward Chan in the Department of Pharmacology, Mathew got one in his senior year. Although he was a novice in the lab, Chan took the time to teach him the fundamental techniques used in research. Nevertheless he had to learn by doing.

“The first time I was making a gel for Western blotting, which is an analytical technique widely used to detect specific proteins in a tissue sample, I got the gel mix ready and was so happy when I poured it into the apparatus,” he said. “I sat and waited for the gel to polymerize but to my horror, I noticed that the gel level was slowly dropping. The entire gel mix leaked through the bottom, which I had forgotten to seal. Instead of getting angry, Dr. Chan laughed and corrected my mistakes. Toward the end of the year, I was making gels for the entire lab and running experiments of my own.”

And that is when Mathew learned perhaps three of the most important lessons in life — humility, patience and forgiveness.

Mathew has no trouble naming his favorite aspect of Stony Brook — the community.

“I was given many wonderful opportunities and met so many great people. Whether it was my friends, my professors, or my mentors, they all played an instrumental role in any success that I have had,” he said. “I am grateful to these people and Stony Brook University as a whole for an amazing college experience.”