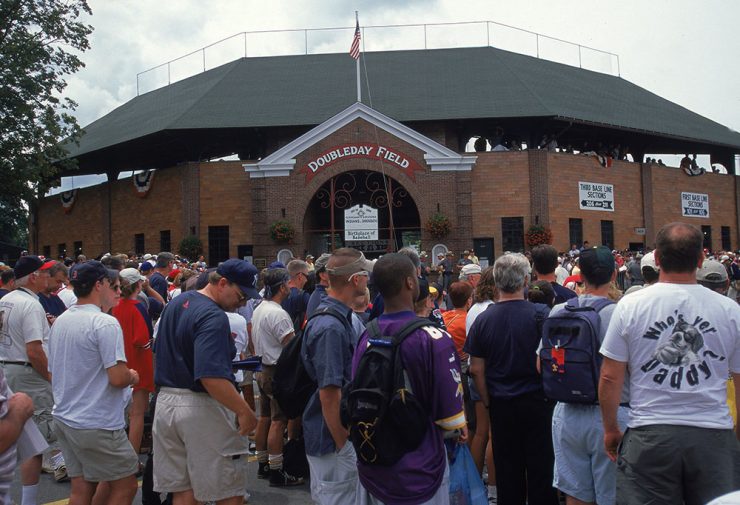 Giving an induction speech at the Baseball Hall of Fame in Cooperstown at the end of a storied career is the dream of every professional player who has ever donned a pair of cleats. But Amal Lukose ‘19, a senior majoring in Business Management and Applied Mathematics and Statistics, has the good fortune to speak at the hallowed Hall before his post-graduate career even begins. And while he hasn’t set any home run records and has no dreams of even playing professionally, what Amal brings to the table can mean much more to the long-term health of the Major Leagues than any home run record: the promise of competitive balance.

Amal’s journey to the baseball diamond actually started in a rather unlikely place:  a basketball court.

“Ever since I moved to America, I’ve been an avid fan of the New York Knicks and the NBA,” said Lukose, who moved with his family to Rockland County, New York from India when he was in the second grade. “But the recent actions and trades of the ownership and management has really made me question the future of the team.”

While the average fan might just complain to other like-minded diehards about the team’s plight, math majors vent their frustration in other ways. In Amal’s case, he became curious about the competitive balance dynamic between small- and big-market teams.

“Some traditional variables have shifted with the harsh luxury tax, the globalization of the game, and rise of social media that allows players to obtain the same amount of recognition while playing from a much smaller city,” said Amal, regarding the NBA. He thought that the financial factors that traditionally affect the NBA’s competitive balance deserved a modern look.

Amal extended his research to baseball after learning that his advisor, Herbert Lewis, associate professor in the College of Business, was a lifelong MLB fan and had previously done similar research almost a decade ago.

“The main difference between the NBA and the MLB is the luxury tax in the NBA,” said Amal. “Our initial results indicate that there are some teams in baseball during the study period that were non-competitive due to salary reasons while no such teams existed in the NBA. So a salary tax might be a solution to future competitive balance in MLB.”

Amal will be presenting his research along with Professor Lewis in a paper titled “Competitive Balance in Major League Baseball and the National Basketball Association: A Comparison of the Two Leagues” at the 2019 Cooperstown Symposium, which takes place at the Baseball Hall of Fame and Museum in Cooperstown May 29 – 31. The Symposium is co-sponsored by the National Baseball Hall of Fame and the State University of New York – Oneonta.

Amal initially came to Stony Brook because it was affordable after the scholarships he received, and it had an excellent applied mathematics and statistics (AMS) program, which was his first major.

“I really enjoyed BUS 220 with Professor Lewis, which got me better acquainted with Excel and operational research,” said Amal. “But my favorite class would have to be BUS 356, Financial Engineering, taught by Professor Michael Nugent. The class worked on projects that were real cases given to Professor Nugent by previous students who now work in the financial industry. It thoroughly improved my financial analysis and Excel skills.”  Amal calls it a “must take” course for any Finance major at Stony Brook.

Outside the classroom, Amal says his fraternity, Iota Nu Delta, has had the biggest impact on his growth. He crossed the fraternity in the Spring of 2016 and has been actively involved in it ever since, serving in positions including treasurer and philanthropy chair, as well as Five Star chair, which focuses on securing as high a rank as possible for the fraternity. He also served as the philanthropy chair of the South Asian Student Alliance for a year and as treasurer of the Investment Club for the past two years.

“These responsibilities have helped me be a leader and work very well with other people,” said Amal. “It also helped me to network both socially and professionally.”

After his graduation – and after his appearance at Cooperstown – Amal hopes to find a job as a financial analyst in New York City. He’s also strongly considering taking the Level 1 of the CFA exam.

“In the long-term I want to become a manager or team leader at a firm,” he said. “I love working with other people and learning how to use the talents of different individuals in the most efficient way.”

An internship as a financial advisor last year at MassMutual should help making the first steps down that road a little bit easier.

“My main job there was meeting and networking with potential clients to do a full analysis of their financial plan to see how sound it was,” said Amal. “Although I’m not interested in a career as an advisor, it taught me a lot about personal finance.”

As the clock winds down on his undergrad career, Amal has some words to help incoming freshmen get as much as they can from their Stony Brook experience.

“There are a lot of resources out there that will help you succeed in class and in life,” said Amal. “The biggest problem I saw is that not enough people take advantage of these. So use them well! Also, don’t forget to have fun. 24 hours in a day is a long time. Make time for your school work and friends. Stony Brook taught me to balance my work life and my personal life.”