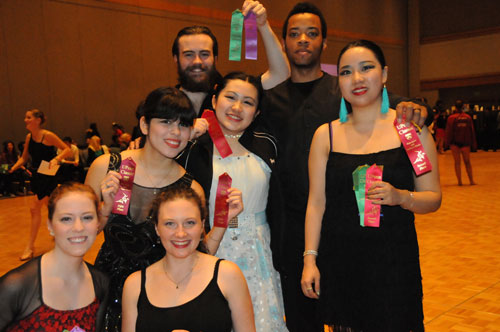 Step by step, twist by twist and dip by dip, the ballroom dance team at Stony Brook University is steadily gliding into the upper echelon of competitive college dancing.

“We have a nice team with all of its components working in harmony with each other,” said the dance team’s coach, Giny Rae Sciurca, who owns Dance Magic Ballroom in Saint James.

“The Gold dancers are working with the silver dancers – and the gold and silver dancers are mentoring the bronze dancers and newcomers,” added Sciurca, a former US Ballroom Champion who started the ballroom dance program at Stony Brook in 1999.

Leading the way at the UPenn Classic for Stony Brook in February were Rick Yang, Jiawen Shen and Ge Song, who combined for two first-place finishes. Yang and Shen teamed to win the Silver Division’s Samba/Jive competition and place second in the Silver Cha/Rumba category. Meanwhile, Yang and Ge partnered up to take first-place in the Bronze Division’s International Rumba.

“Having our members communicate and help each other out has been a huge part of our success,” said Napat O-Charoenrat, 20, a senior double-majoring in applied mathematics and economics.

O-Charoenrate, an international student from Thailand, is president of the dance club. He joined the club during his freshman year. At the UPenn competition, O-Charoenrat and Alexandra Gorski placed second in the Gold Division Samba/Cha/Rumba/Jive.

“What’s particularly exciting about our team is that our membership is the biggest it’s been in many years,” O-Charoenrat added about the club, which has been in existence for 15 years.

The club, comprising more than 50 students, devotes three of its five weekly practices to competitive dance movements. Monday night’s practice is strictly for social dancing and Wednesday’s focuses on performance instruction. Participation is open to all students on campus.

Collegiate ballroom dance teams provide an affordable way for students to take on ballroom dancing. Stony Brook’s club is dedicated toward creating an environment that nurtures all levels of experience.

Stony Brook’s team has started rehearsing for the university’s “Dancing with the Stars,” held on April 15. And to help prepare for the MIT competition, 34 members of the team will take part in Rutgers University’s Dancesport Competition on April 11.

“After working extremely hard during the fall semester, our dancers have started to see the results of their hard work,” said Sciurca, a former U.S. Ballroom champion.

“We’re a small team compared to the likes of New York University and Harvard, but we have a lot of heart.”