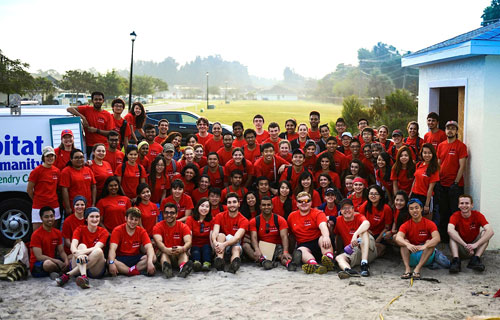 This year’s Alternative Spring Break Outreach (ASBO) returned to a familiar cause and broke some new ground.

For the first time this year, ASBO’s executive board used a resource called Break Away, a database for alternative break programs looking to team up with nonprofit service organizations across the country. That’s how the club found Habitat for Humanity of Lee and Hendry Counties of Florida.

ASBO had worked with Habitat for Humanity before, traveling to New Orleans in the aftermath of Hurricane Katrina in 2005 and 2006. When the executive board discovered that people in these Florida communities were still in serious need of homes because of the lasting devastation caused by Hurricane Charley in 2004, the decision was made to head to Fort Myers and volunteer with Habitat for Humanity for a third time.

“Our decision was based on the fact that a great deal of these people are insolvent or close to living in poverty conditions,” said ASBO Secretary, Joe Malone, a junior journalism major.

In another first, Dean of Students Timothy Ecklund flew down to work alongside the students on their last day of work.

“It was nice having Dean Ecklund there to get a full understanding of what ASBO is all about,” said Malone. “He witnessed the incredible work ethic that all the members embodied.”

Although the group worked hard, the students also managed to squeeze in some well-needed R&R. They arrived in Florida on Saturday and, since Habitat for Humanity is not active on Sunday, managed to spend most of that day on the beach.

Through the following week, students put in workdays lasting from 8:00 am until 2:30 pm; in the evenings, they enjoyed free time playing card games, kayaking on a river near their lodging site, and bonding while gathered around bonfires at night.

“My favorite part was the mixture of fun and play along with the hard work and community service,” said senior Spanish major Carolina Torres. “We didn’t talk about whatever classes we were worried about. It was a good time for us to get our heads out of schoolwork and focus on ourselves, each other and what we were really there for — helping others.”

Michael Valiadis, a senior political science and psychology major and executive board treasurer, said, “Initially there were cliques, but then everyone started meeting and incorporating new people into their groups.”

“We built more than houses together,” said Malone. “We built relationships.”